When the weather outside is frightful and your belly craves something delightful….

That may not be an award-winning version of the song, but the concept of hunkering down in the cold months and wanting to enjoy a food to match the setting is relatable. Personally, I crave a nice rich stew to satisfy my cold weather fix. Stews come in all shapes and sizes, whether you like chicken, beef, pork, or just vegetables, it doesn’t matter, but we're going to focus mostly on the animal protein end of the spectrum in this post.

First, let's talk about the type of meat cuts you should use. The technique of stewing has been around from the beginning of our known culinary history. Cooking was initially only done directly over fire or in clay/stone ovens. As our ancient ancestors began to move forward in innovation and developed methods of metal manipulation, they discovered that water could be boiled over fire in metal vats (aka pots). This little discovery is roughly about when humans began to step up their culinary game. Although boiling food was not glamorous, it was a nice change of pace from the fire torched method they only knew. With simply boiling, things changed quickly and eventually we developed the art in culinary “arts”.

As time continued, the class and hierarchy of civilization begin to separate more and more. Kingdoms would feed their people from the top down. While the wealthy would get the best cuts of meat, the plebeians would be stuck with the scraps, tendons, bones, and end pieces. After eating these tough scraps, over time you would likely get tired of eating rubber band textured meat (if not then TMJ would surely make it less than pleasant). As is human nature, curiosity and desperation provoking many attempts to create some sort of edibility from this and after many failures there were some successes. Skip forward to present day and you will come across a few delicacies which can be traced back to these ancestral attempts, such as Hamhock soup, pork belly, Coq au Vin and even braised chicken feet!

When braising, you cook for long amounts of time at a low temperature to fully cook the protein and tenderize any tough tissues. These tissues are everything from literal tendons and cartilage to those little chewy strips you come across in steak or chicken tenders. If there is one thing to take from this post, I want you to understand that some of the cheapest and toughest cuts of meat will be the best choices for your stews.

Chicken: If you are looking to make a chicken stew, I would choose thighs, as the breast has very little connective tissue in it and a much lower fat content. The thighs' high fat and connective tissues will offer you a tender product after a relatively short cook time.

Beef and Pork: These two proteins are very similar in anatomy. Not necessarily in size and shape, but the location of each cut will have similar connective tissues and general muscle fiber sizes.

Traditionally for braising, I prefer to use what I would call “work muscles”. These are the muscles that the animal will use a lot for motion and or lifting loads. These parts consist of the hind quarter (the rear leg and up into the buttocks) and the front shoulder area or fore-quarter. In a meat case or butcher shop, you may see a general label of “Stew Meat” or some of these cuts named as follows:

Pick up a batch of this type of beef and make my favorite hearty beef stew perfect for the chilly weather.

1. Heat a wide bottomed pot on medium high heat with half of the butter and after it's melted, add the beef and season with salt and pepper.

2. When the beef has developed a deep brown color, add remaining butter and flour and stir until the flour has absorbed the excess butter. 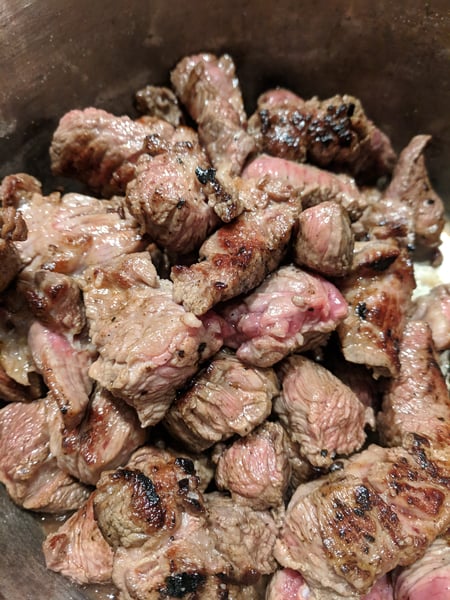 3. Add onions, celery and carrots and allow to cook on medium heat until onions are translucent.

4. Add garlic, rosemary and thyme and allow to cook until aromatic (about 45 seconds to 1 minute), and add the chopped tomatoes. 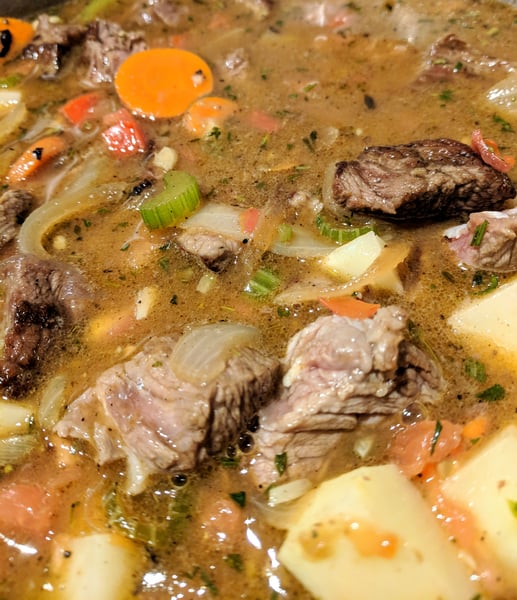 5. When tomatoes are softened, add the beef broth and potatoes then bring to a boil. Turn down to a low simmer and cover, cooking for approximately 2 hours or until the meat is tender. Add green beans and allow to simmer for an additional 5 minutes. 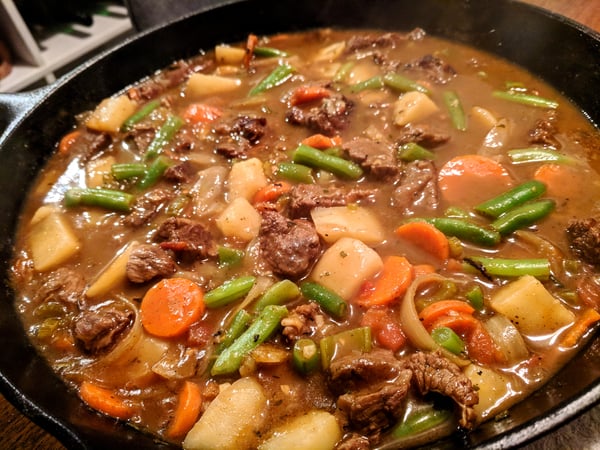 Want more help with soups and stews perfect for this time of year? Check out The Chopping Block's upcoming classes: