Cooking from the Farmers Market

I love farmers markets. Not only do you get access to the best tasting, seasonal produce picked at its peak of flavor, but it has traveled just a short time between the farm and market to get to you. Plus, you get to chat with the lovely folks who grow it! Believe me, they know the best way to prepare what they are selling.

When I lived in Chicago, I visited Green City Market in Lincoln Park every Saturday to stock up on produce, fresh flowers and have breakfast. Now that I live in Florida, the growing seasons are quite different from the Midwest. When I visited Chicago just a couple of weeks ago and returned to GCM, you could find literally anything and everything you could think of available right now. But here, we are in the limited season of peppers, okra, squash and eggplant.

Inspired by my trip to Chicago, I visited my local farmers market in Pensacola last weekend. Unfortunately, it had been a while (thanks COVID) so I was curious to see what new offerings I would find. With my reusable tote in hand, I had just a vague plan of what I wanted to procure. This post outlines some rules to help you navigate a trip to the farmers market, and I definitely took the advice, especially leaving a little room (and cash) for surprises.

I picked up a jar of my absolute favorite mustard, Smokin' Dixie from Matt's Mom's Mustard (isn't that name cute?). Even though they have over 70 flavors now, I always find myself buying this one. I slathered it all over a pork loin that I grilled on indirect heat for an hour and a half later than night, and it was delicious. 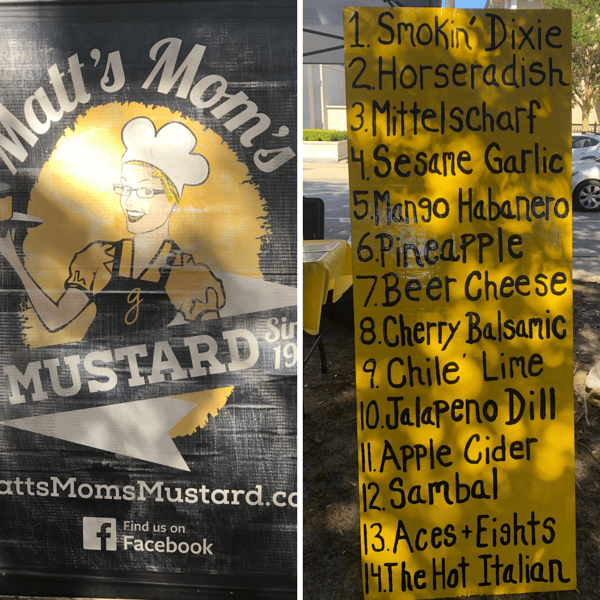 I stopped and listened to the bluegrass band for a while. Look at the little one who participated in a jam session! 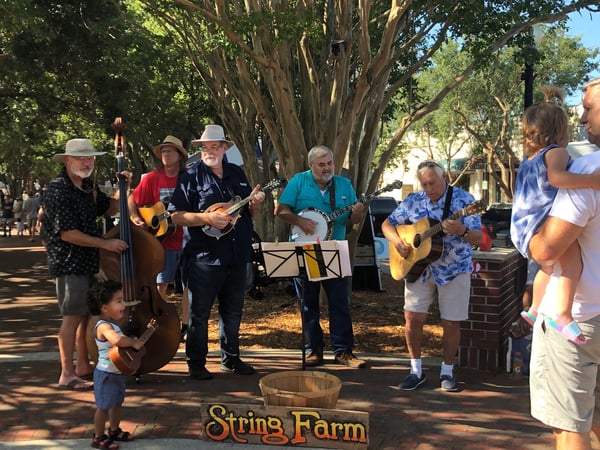 Even though the plant stands were right nearby, I managed to exert tremendous willpower not to buy any of these beautiful Birds of Paradise. I already have two at home, and I have a severe plant addiction! 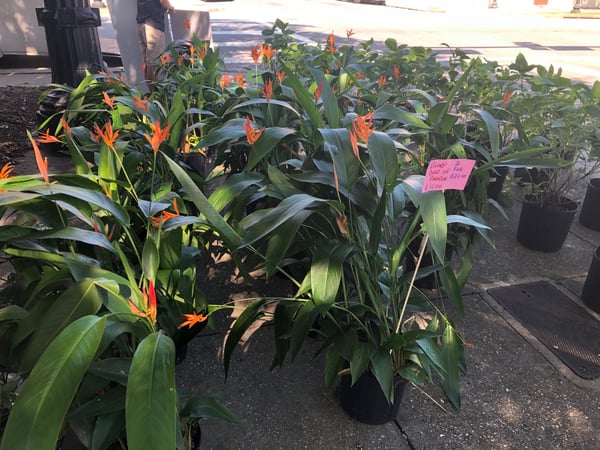 My dog, Boz, benefited greatly from my farmers market visit. I picked up two bags of treats for him! 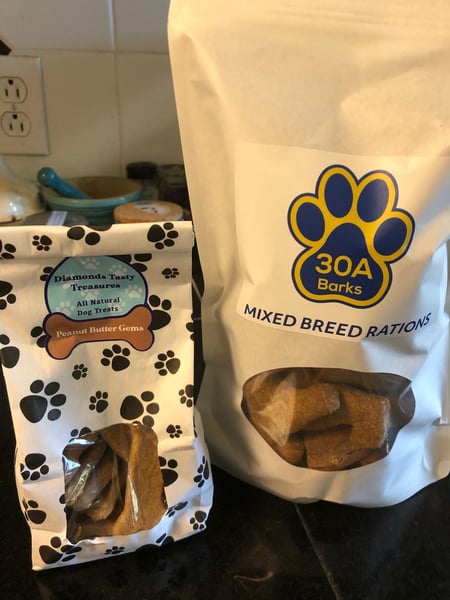 Now, finally onto the produce. I picked up some Shishito peppers and okra from a farmer at the market and when I commented how they were one of the few that actually had produce, the farmer told me, "It's a tough time of year here in Florida."

As an avid gardener myself, I know how true that is. My tomatoes are already done, and even my peppers aren't doing well in this intense heat. After I moved here and took a few classes in organic gardening, I quickly learned there are two growing seasons in the Florida Panhandle: spring and fall. You can pretty much write off summer completely due to heat and bugs, but I've learned that there are lots of vegetables hardy enough to survive our mild winters.

One benefit of shopping from local farmers is that you are getting produce at the peak of its season, when it's at its ultimate flavor. If you need some help navigating cooking methods for what you see at the market, we have a class for that! Join us this Thursday, August 19 at 6:30pm at Lincoln Square for a Farmers Market Cooking Demo.

You've likely seen blistered Shishito peppers as an appetizer on Asian or Spanish menus, as well as your local market. The pepper's skin is very thin with minimal seeds so you can eat them whole. Generally mild in heat, only about one in ten peppers are actually spicy, so it's a little like playing pepper roulette! 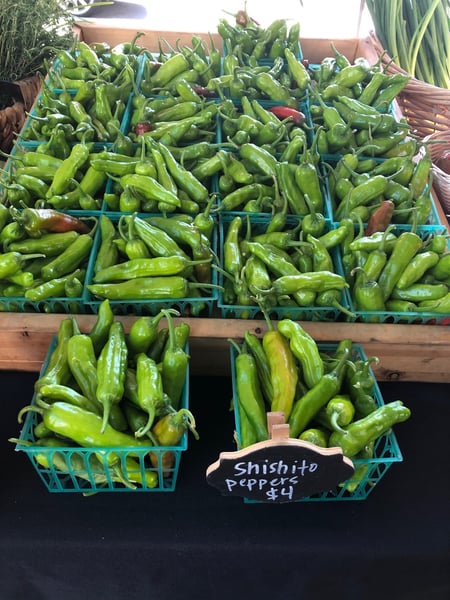 This blistered pepper recipe is the easiest appetizer you'll ever make. I don't offer quantities in the recipe below because you only need enough peppers to cover the bottom of your skillet without overcrowding the pan. You'll use enough olive oil to lightly coat the peppers.

Most recipes will tell you to use high heat when cooking the peppers, but I've found that using a medium heat and cooking the peppers for a longer amount of time gives you more consistent results. I use olive oil because I like the flavor it adds to the peppers and since olive oil has a low smoke point, you shouldn't cook on high heat with it. Don't forget the dusting with large flake sea salt (we sell a great one at The Chopping Block)!

Serves: 4 as a side dish 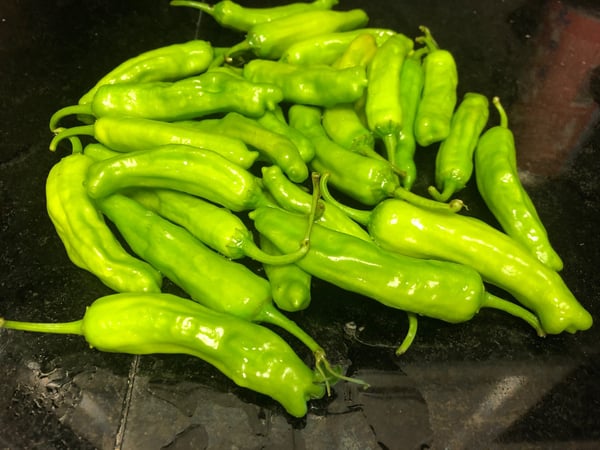 1. Put the peppers in a medium bowl and drizzle with olive oil. Toss until the peppers are evenly coated. You want to make sure there is oil in all of the crevices of the peppers.

2. Preheat a cast iron skillet over medium heat until hot. Add a thin coating of oil to the pan. You've already oiled the peppers, so you don't need much oil in the pan. Add the peppers and cook, stirring every minute or so but not too often that they don't have time to develop a char. They should be tender with charred spots within 10 minutes. You will hear them pop which is a good sign! 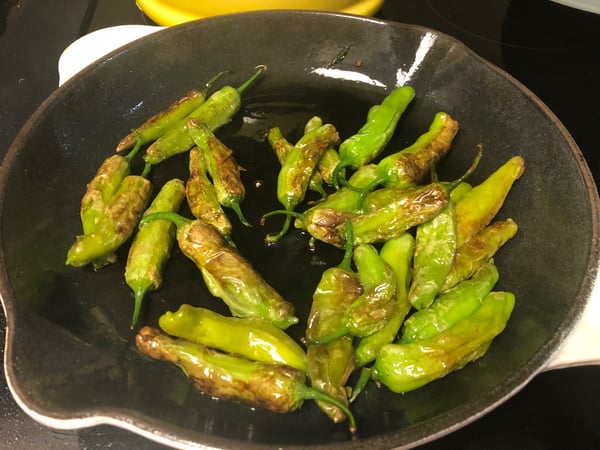 3. Transfer to a serving plate and sprinkle generously with flaky sea salt. 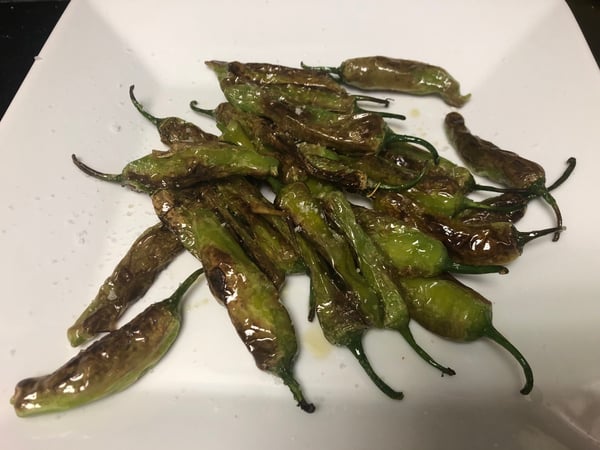 Another way to use Shishito peppers is to stuff them with pimento cheese and air fry them. They are like mini Jalapeno Poppers but even better and way easier to make! You can use store-bought pimento cheese or make your own with this recipe. 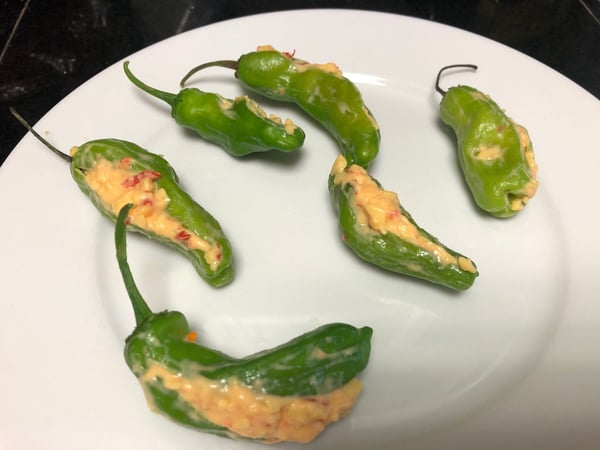 All you have to do is make a slit down each pepper and stuff as much cheese as will fit. Spray your air fryer basket with oil and air fry at 400 degrees until the cheese is melted and the peppers soften, about 5 to 8 minutes. 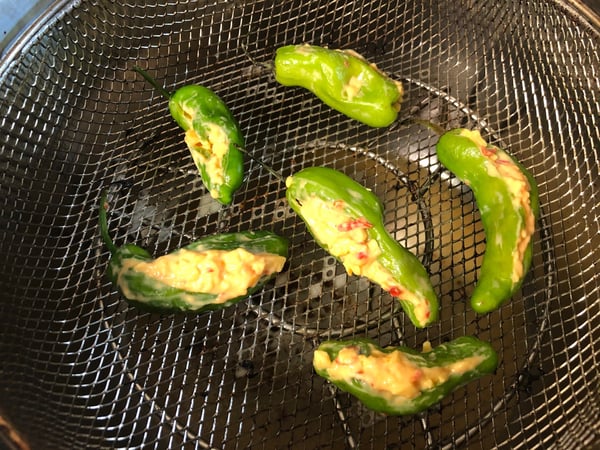 If you don't have an air fryer, you can easily do them in the skillet just like the blistered peppers above. Try not to turn the peppers too much so the cheese stays inside. Once again, finish with a sprinkling of flaky sea salt. 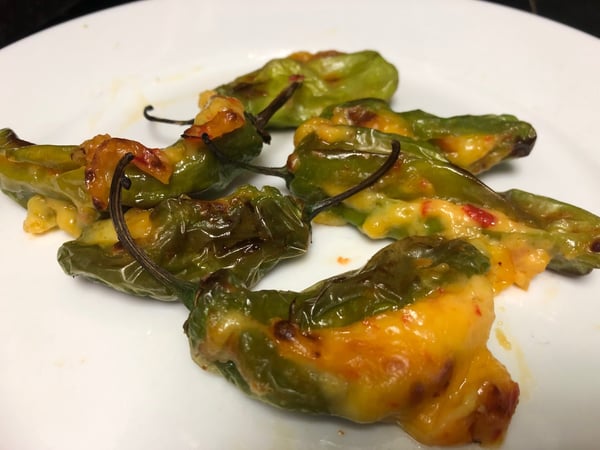 I also picked up some local zucchini, and since Sneak Some Zucchini on your Neighbor's Porch Day was on August 8th, I had to share this recipe that a friend of mine clued me into. First, we both are big fans of Deb Perelman, who started you may know as Smitten Kitchen from her blog and now several cookbooks. Her cooking is unfussy (she often tells you how to avoid dirtying more dishes) and literally every recipe I've ever made of hers is a winner.

So when my friend gave a big thumbs up to this zucchini pasta recipe of Deb's, I knew it was a great way to use up my three large zucchini squash. Full disclosure: I used a quinoa pasta in order to help myself feel better about the large quantities I knew I would eat of this dish.

Serves: 4 as a side dish

1 1/2 teaspoons kosher salt, plus more for pasta water, and to taste 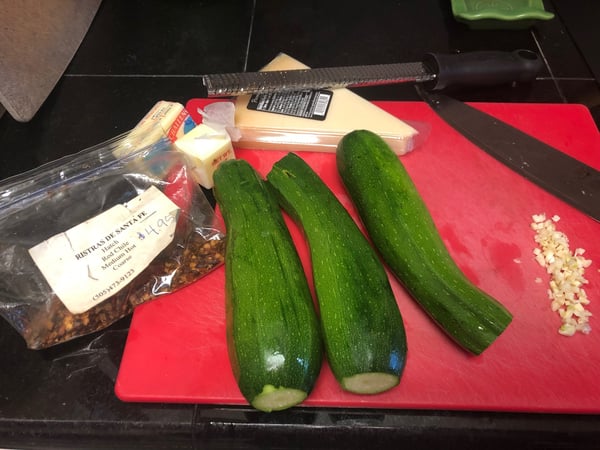 1. Boil the spaghetti in well-salted water until it’s 1 minute shy of fully cooked (follow the instructions on the package since different types of pastas will cook for different times). Before you drain it, reserve 1 cup of the pasta cooking water and set it aside.

2. Grate the zucchini using a food processor. I grated all three zucchini in less than a minute. Yay for power tools! 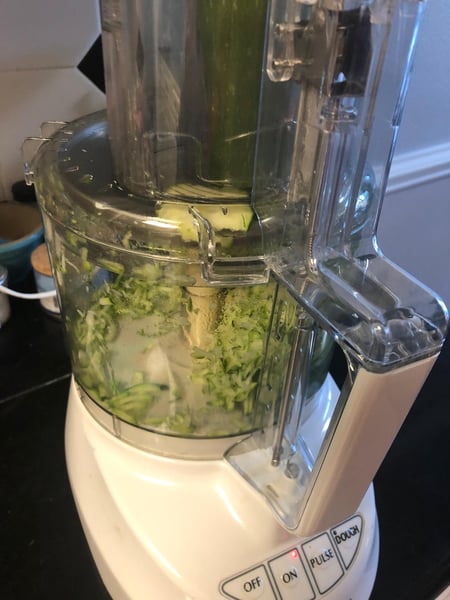 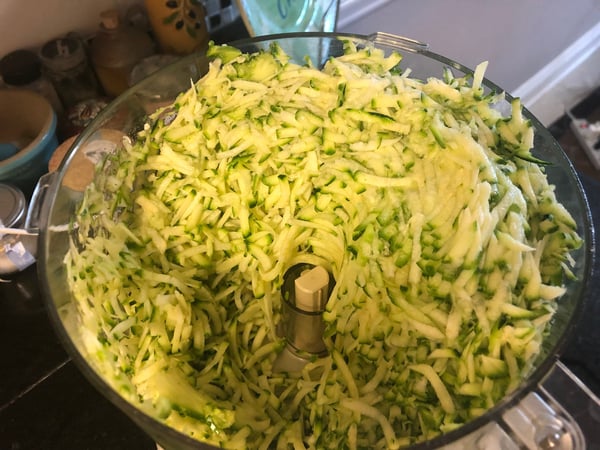 3. Melt butter in a large pan over medium-high heat and add the garlic, stirring it into the butter for one minute before adding the zucchini, salt and red pepper. 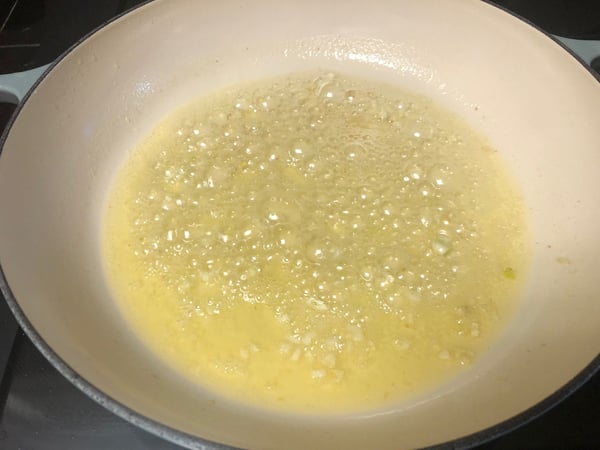 4. Cook the zucchini, stirring from time to time, for 15 minutes. It will first let off a puddle liquid, the liquid will cook off, and the zucchini will become soft and concentrated. If the zucchini begins to brown, reduce the heat slightly. Scrape off any fond that sticks to the bottom of the pan. Eventually, the zucchini should reach an almost spreadable consistency. 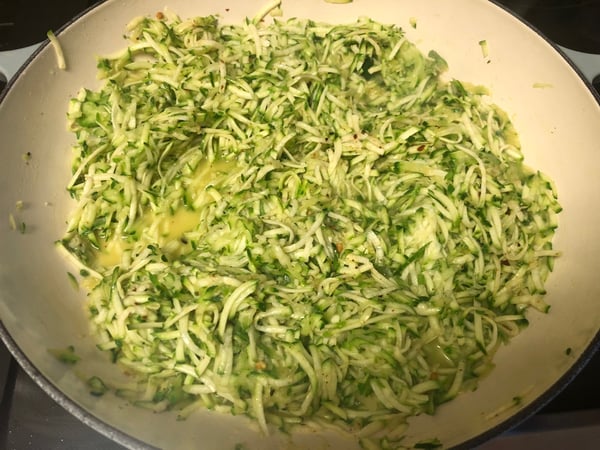 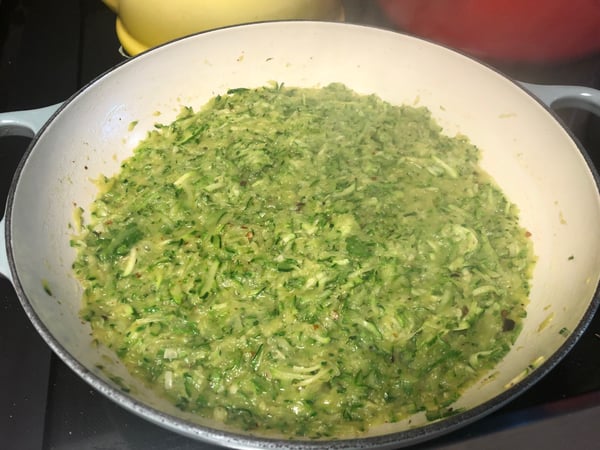 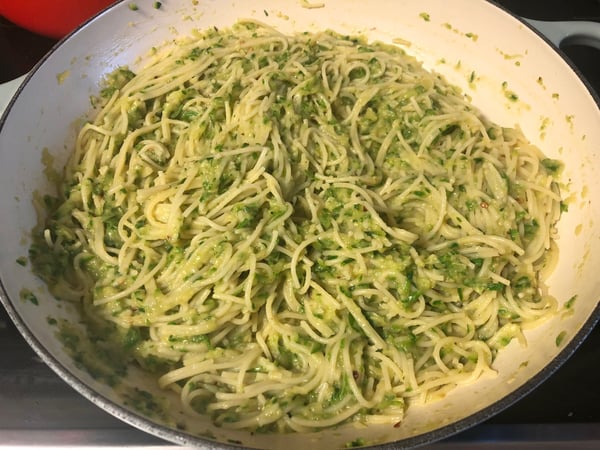 This dish was incredibly easy to put together and it truly tastes like zucchini butter. I think it would also work well to toss potatoes, cauliflower rice or even quinoa in it. It was so good, I may even try just spreading the zucchini butter on bread (move over avocado toast!).

If you want some help navigating the bounty found at local farmers markets this time of year, don't miss our demonstration class at Lincoln Square this Thursday, August 19 at 6:30pm. Our chef will shop the Lincoln Square Farmers Market procuring the best it has to offer and create an impromptu meal from the bounty, teaching you important cooking techniques along the way.

Yield: 4 as a side
Author: Andrea Miller
Print 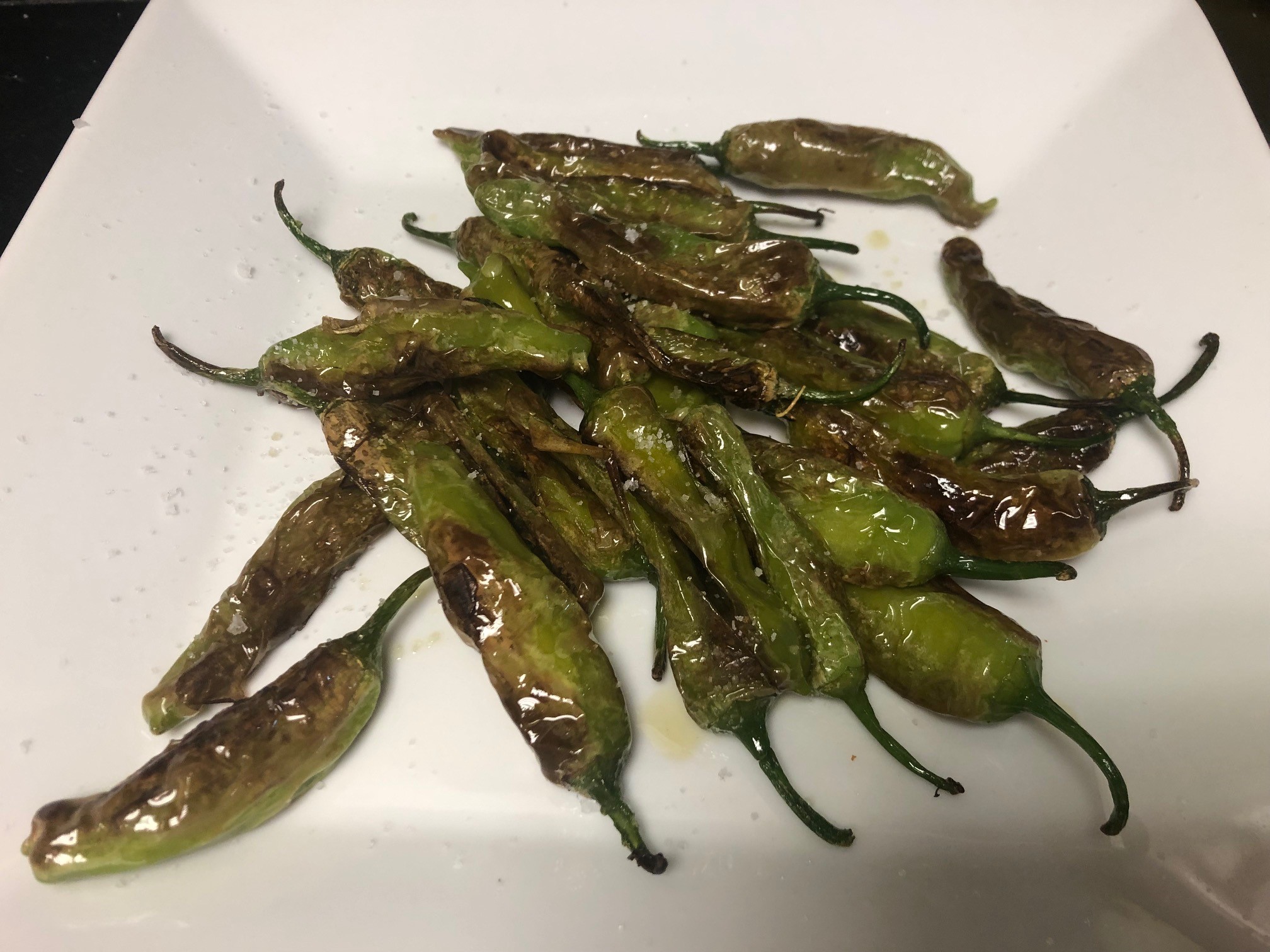