It's been called “The Impossible Chocolate Cake” and “Magic Mexican Chocolate Flan Cake,” but I prefer calling it “Chocoflan!” 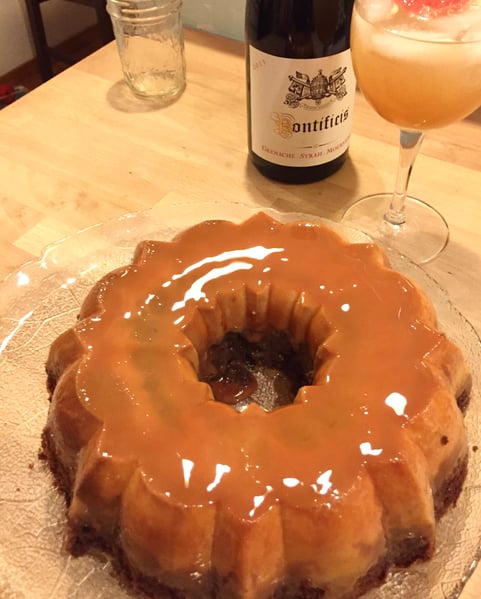 It has been said that this cake defies baking logic. Here’s the reason why the two batters never mix, and amazingly reverse positions while baking in the oven. A science editor from the PBS series, America’s Test Kitchen explains that by combining the baking soda and acidic buttermilk in the cake batter, it produces a gas, making the cake less dense than the flan. The lighter cake layer rises and the denser flan layer sinks. The Chocoflan is baked in a water bath, which is critical as well in order to make the process occur.

In a pinch, you can also use your favorite store-bought caramel sauce as well. There’s even a way to make your own “dulce de leche” by simmering a can of condensed milk in a pot of water for two to three hours. Make sure that you remove the label from the can, place the can in a large pot and cover with enough water to cover the can by at least 2 inches, remembering to pay very close attention to the water level in the pot as the can simmers, always remembering to add more water when the level gets low.  If you let too much water evaporate and the can is not fully submerged, it can overheat, tear or even explode. After the can has gently simmered for 2 to 3 hours, let your can come to room temperature, open and stir to completely combine your “dulce de leche”.

I’m not really a huge fan of baking, but for the last few years I haven’t let that prevent me from attempting to make some very ambitious desserts. I’ve made Chocoflan for a couple of years now and decided to make it once again as the dessert for a backyard party. This was my third attempt at Chocoflan and with each attempt I used a different recipe or tweaked it in some way.

The first attempt was pretty magical! The flan was light, creamy and delicious, and the chocolate cake was dense, yet very flavorful. For my second attempt, I wanted to lighten up the cake just a bit and try to make it less dense. With that attempt, I felt that I thoroughly failed. I didn’t care for the chocolate cake part of the dessert. However, I had made the cake as the dessert for a dinner party, and my friends absolutely loved the cake, which made me feel better about that attempt. I must mention that with each attempt I used a more a complicated recipe than the one before it. So after doing a bit of research, I stumbled upon a recipe that claimed to be foolproof and seemed to be simpler than the other two I made.

This one had a simple dump-and-stir chocolate cake recipe. I loved the simplicity of this batter! It’s simply mixing together your wet ingredients, then stirring into the flour mixture until incorporated. This made a drier cake, which is what I was trying to avoid in my second attempt at Chocoflan. Who knew that the whole idea of having a drier more dense chocolate cake would prevent the moisture from the flan from making the cake soggy? So it turns out the very first Chocoflan that I made where the cake was a bit dense was the correct one.

Now it was time to perfect the flan itself. I’ve made flans of all types and flavors, and I’ve always preferred the very smooth, creamy and light textured ones. The recipe for this flan consisted of ingredients that would keep the flan itself tall when sliced, rather than slumping over. That involved using whole eggs instead of just yolks and adding cream cheese as a stabilizer. I happened to cut back on the cream cheese by 2 ounces and eliminating one whole egg to lighten the flan just a touch.

As I mentioned earlier the “cajeta” or “dulce de leche”, can also be substituted with any caramel sauce you might want to use.  I just happened to have on hand a jar of Salted Maple Caramel Sauce in my fridge that we sell at The Chopping Block.  I had used the sauce on one other occasion where I drizzled it on an apple crumble pie that I made. I wanted a bit of the tang from the goat’s milk that you get with a “cajeta” so I decided to combine the “cajeta” with the caramel sauce, using half of each. The end result was a pretty tasty one! 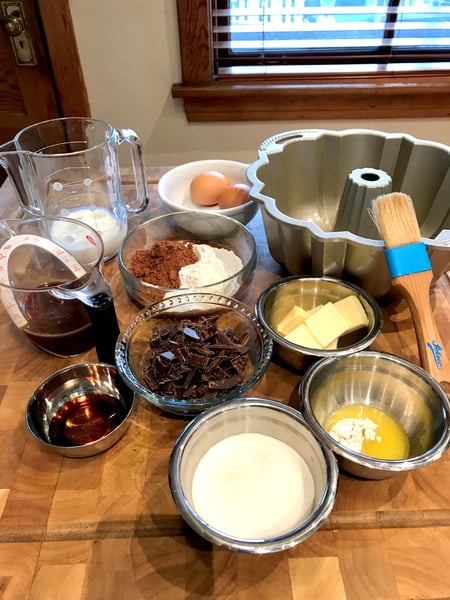 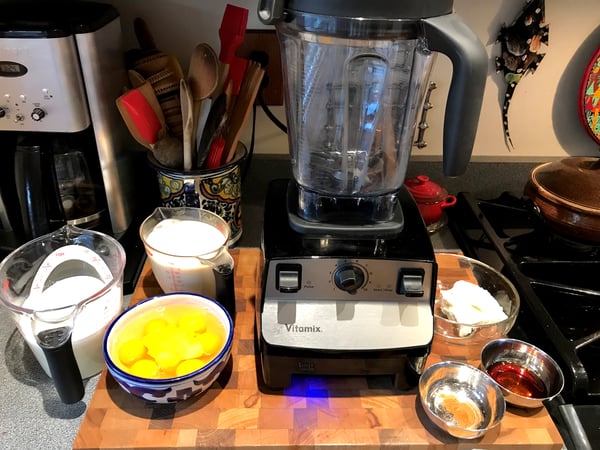 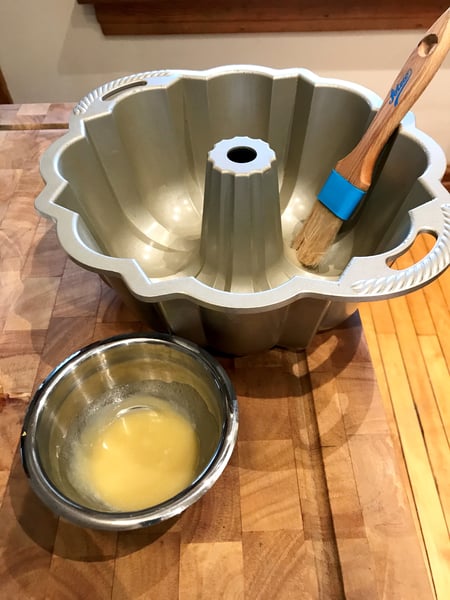 You can also use any non-stick cooking spray, as well as those that contain flour. Pour your caramel sauce into a microwavable container and microwave until it’s easily pourable, about 30 seconds. Pour into the Bundt pan to coat the bottom of the pan. In a large bowl combine flour, cocoa powder, baking soda and salt and set aside.  Combine chocolate and butter in a large microwaveable bowl and microwave at 50 percent power, stirring occasionally until the chocolate has melted, about 2 to 3 minutes. 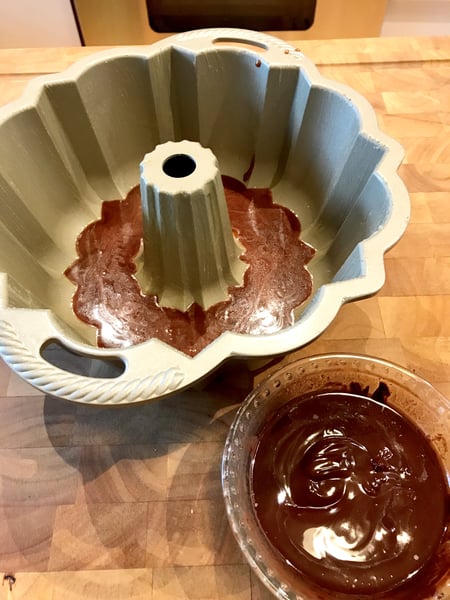 After you've microwaved the chocolate and butter mixture, let it cool slightly, just a couple of minutes. While the mixture is cooling, in a large bowl whisk the buttermilk, sugar, eggs, vanilla and cinnamon. Add in the cooled chocolate and butter mixture and whisk to thoroughly combine. Next add in your flour mixture and stir until the mixture is just combined. Next, pour batter over caramel in the prepared Bundt pan.

Place all the flan ingredients in the blender and blend until smooth, about 1 minute. 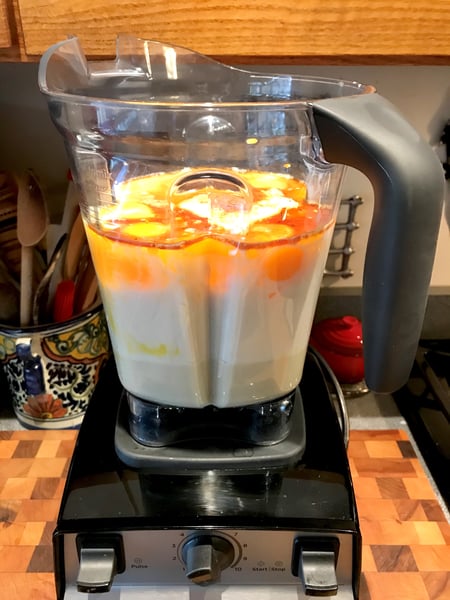 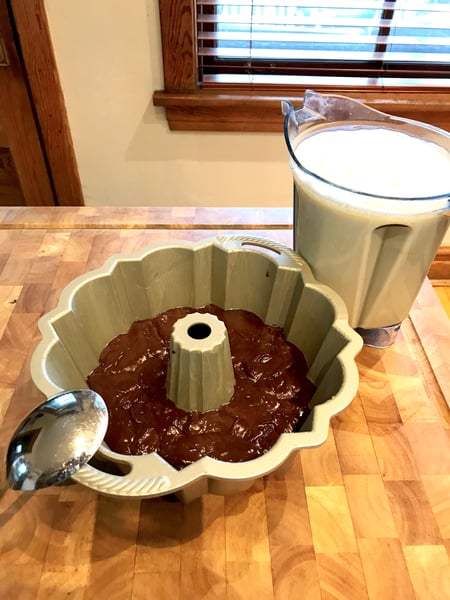 Pour about three quarters of the way up of the Bundt pan. If there is any leftover flan mixture, you can save it to make a small flan at another time. Place the cake in a roasting pan and put on the oven rack and pour warm water into the roasting pan until it reaches halfway up the sides of the Bundt pan. Bake for 75-90 minutes, until a toothpick or cake skewer is inserted into the cake and it comes out clean. Transfer the Bundt pan onto a wire cooling rack. Let the cake cool to room temperature for about 2 hours, then refrigerate until the flan sets, at least 8 hours or overnight. 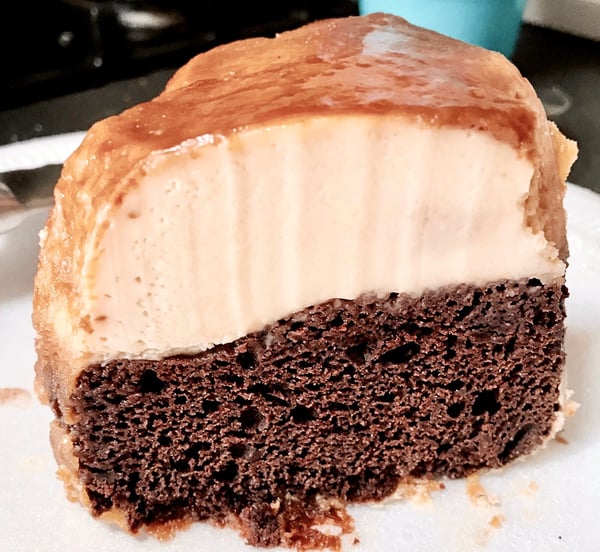 If you’re a fan of chocolate cake and a lover of flan like me, this just might be the perfect dessert for you. You get two amazing desserts all baked in the same pan and in the coolest way!

You can call this cake magical or impossible, I just prefer to call it delicious!

If you go crazy for chocolate like I do, you must also download our free guide and recipe collection Chocolate Craze.