I was recently in South Carolina for a reunion with some old gal pals from high school. We stayed at the home of one of the women and while we ate out one night, this gave us the luxury of being able to cook together the remaining nights as we gabbed it up and enjoyed each other’s company. The first morning we were there, we headed to the farmer’s market to stock up for the weekend. I was so looking forward to finding some local foods that I might not find here in Chicago, and I wasn’t disappointed. We ran across a vendor selling Muscadine grapes, and these were the largest grapes I had ever seen!

Honestly, this photo doesn’t even do them justice; some of these were nearly the size of a golf ball! I learned that while both are Muscadines, the green ones are a subcategory known as Scuppernongs. Since I can’t quite manage to get that one out without giggling at my pronunciation, I just refer to the whole lot as Muscadines! They are very tough-skinned, with a sweet fruit. I was told that people generally peel them and eat the inside pulp, tossing away the skins.

Our hostess dug up a recipe for Muscadine Grape Cobbler, something I never would have thought to make with them. She put me in charge of making it and wow, did it ever prove to be a tedious task: first peeling the skins (the grapes do not simply pop out, these skins really cling to the pulp!); simmering the pulp to release the seeds; cooling the pulp to separate the seeds; and finally, returning the skins to the pulp to soften the skins to an edible consistency for the cobbler filling. It was quite time-consuming, but the result was a delightful cobbler that we all enjoyed after dinner that night. I noticed that adding the skins back in gave it almost a Concord grape flavor, sort of sweet and tart at the same time.

After I returned to Chicago, I couldn’t stop thinking about that cobbler. The taste of the Muscadines brought back a “taste memory” of the Concord grapevine that ran the length of my grandparents’ backyard when I was growing up. My sister and I couldn’t get enough of those grapes and I remember my mother making grape jelly at least one year – perfect for the peanut butter and jelly sandwiches we loved. So, one thing led to another: Muscadines, cobbler, Concord grapes, PB&J. Can you follow where that was going? What if I could do a similar cobbler, but used Concord grapes and could somehow add in the flavor of peanut butter? And so this idea for my PB&J Cobbler was born!

Since it’s only the beginning of the season for Concord grapes, I had to scout around a bit, but finally found some plump, juicy grapes from Michigan’s Cronenwett Farms at Plum Market. They were perfect! 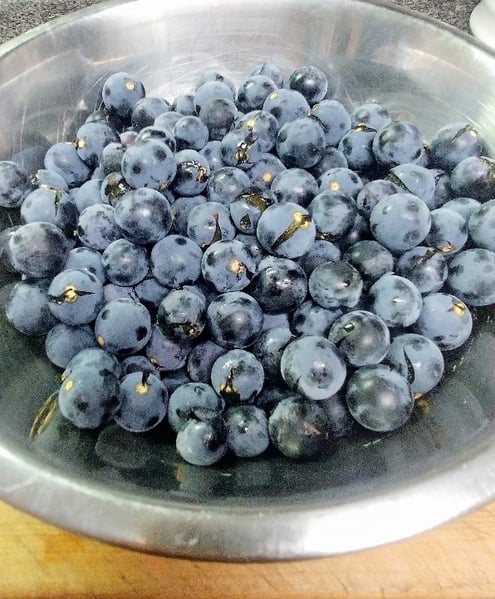 Even though I was really excited to work this out, I was also looking to avoid the more time-consuming tasks I encountered with prepping the Muscadines. I was delighted to find that when I cut a Concord grape in half, the seeds were all clustered at the center, not scattered throughout the fruit as they were with the Muscadines. So, even though the Concord grapes can just be “popped” out of the skins, no peeling was even necessary with these – yay! Seet how easy it was to seed the grapes and prep the filling.

Did you see all those seeds? I was thinking of saving them and planting them for a little grapevine of our own next summer, but I’m not sure our city balcony would support such a venture!

While those 2 pounds of pitted grapes, 1 cup of sugar and the zest of 1 lemon were simmering for a few minutes, I went ahead and prepped the biscuit dough topping. Now I’ve been using the same biscuit dough topping for cobbler for years. But here is where I wanted to introduce some peanut flavor to the cobbler. For the “drop” style biscuit on the cobbler, I typically use melted butter. Could I substitute peanut butter for the butter? Or would this turn out the way it did when I was about ten years old and decided that peanut butter would make a nice addition to meat loaf? (I kid you not, this is part of embarrassing family lore, but I digress.) Well, after doing some research, it turns out I’m not the only one who ever decided they wanted to substitute peanut butter for butter in baking. Without getting into a whole lot of detail, it has to do with the difference in the ratio of fat to protein between the two. To convert, I learned that I had to add oil to the peanut butter in 1-to-1 parts. Since I needed 4 T (half a stick) of butter for my usual recipe, I would substitute 2 T of peanut butter mixed with 2 T of canola oil instead. Here’s what that looks like.

As I mention in the video, I used canola oil because it’s flavorless. However a light bulb kind of went off as I was walking you through it, and I realized that I could have used peanut oil instead, which would have enhanced the peanut flavor even more. I also mentioned that I would list the ingredients in the biscuit topping, so here you go:

You can see in the video that the dry ingredients can be combined together and the wet ingredients can be combined together, but I like to keep the wet and dry separate until after the finished filling is poured into the baking pan. This way it won’t be sitting for very long before using it. I find that it sometimes falls flat when everything is combined and not used right away.

By now, the cobbler filling will have simmered for about 8-10 minutes and will be done. This is just enough time for the grape skins to become tender. In fact, you’ll know it’s done if you taste a skin and it feels like a comfortable texture to eat. Simply remove the pan from the heat. I like to thicken it up a bit with some cornstarch (1 T cornstarch mixed with 1 T cold water), because you’ll see that A LOT of liquid is released from those grapes. Take a look at finishing off the filling, mixing the biscuit dough and putting it all together.

So into the oven it went! I used a cast iron pan because I think it just adds to the overall rusticity of the dish. But you could easily use a glass or ceramic pie plate or other baking dish instead. Just use what you love! Whatever you decide, be sure to place a sheet pan or cookie sheet underneath because sometimes the cobbler boils over a bit. And it’s so much easier to clean up a pan than the bottom of your oven!

I preheated the oven to 400⁰ for 10 minutes. Then I lowered it to 350⁰ for another 10 minutes. At that point, the biscuits were as brown as I wanted them to be, but the filling wasn’t bubbling as much as I wanted it to. So I just placed a piece of aluminum foil over the top (no crimping, just rest it lightly on top) to keep the biscuits from browning more. I let it go for another 10 minutes and when I saw the filling bubbling beautifully, I took it out to cool. 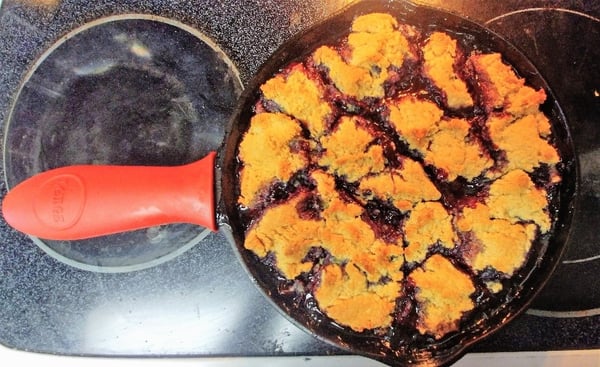 Look at that! All “cobbled up” and scrumptious looking! But while the biscuit dough was deliciously peanut-y, I knew I wanted more, simply because those Concord grapes have such a strong flavor. With that, I took to my fridge searching for my favorite peanut dessert sauce…

This is SUCH a great “pantry staple” to have on hand and it’s so easy to make! Just heat together:

Pour it into a jar and store it in your fridge. Reheat it by putting the jar (uncovered) in a little pan of simmering water when you want to use it. It’s awesome on ice cream, wonderful for dipping apple slices – I just figured why wouldn’t it be the perfect addition here, as well?

So, finally, a little cobbler, a little ice cream, a little bit of peanut sauce and an extra little sprinkle of chopped peanuts.

And ta-da! PB&J cobbler! If you loved PB&J sandwiches as a kid, I promise you all the taste memories – you’ll love it.

At The Chopping Block we love to cook with cast iron. Our Lodge cast iron pans are very reasonably priced and are something your family will enjoy for generations. Sweet or savory, cast iron does it all. Even our infamous apple pies are baked in cast iron pans. These amazing pies will once again be on offer at Lincoln Square’s Apple Fest coming up early next month, October 6 and 7. Be on the lookout for information on pre-ordering pies and come see us!