Turn the Heat Up or Down in Homemade Harissa 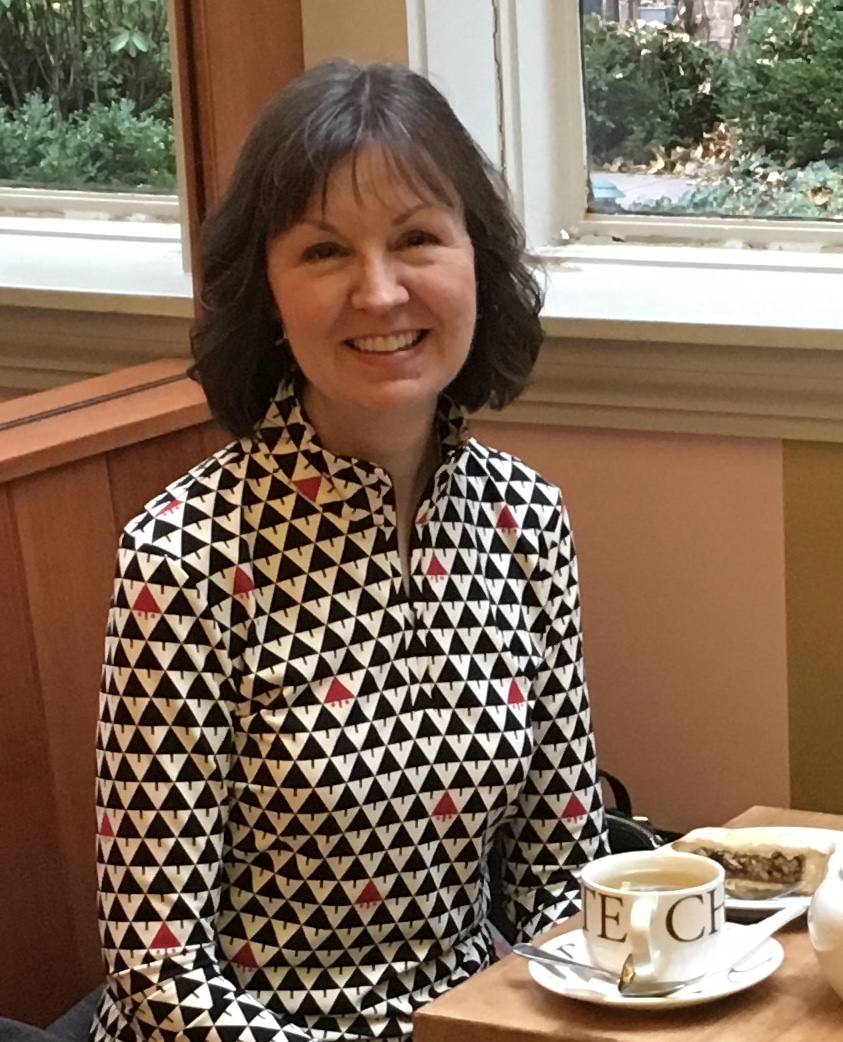 I absolutely love the flavors of Middle Eastern and North African cooking - the warm spices of cumin, cardamom, turmeric and cinnamon to name just a few; the freshest vegetables including tomatoes, eggplant, bell peppers and chickpeas; and of course, the meat and grain accompaniments that make this cuisine one of the most heart-warming and delicious. 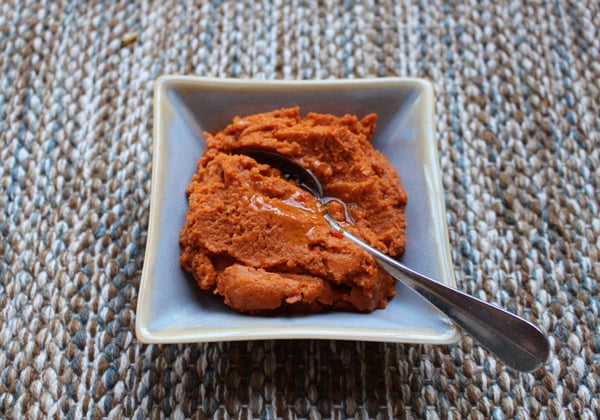 But then comes the finishing touch - harissa - a trendy ingredient that many of you have undoubtedly tried. Harissa is defined as “a hot sauce or paste used in North African cuisine, made from chili peppers, paprika, and olive oil.”  My experience with this spicy concoction goes back decades (way before it was cool) to the tables of North African restaurants in Paris, France during my junior year abroad. Caught unawares, I burned my mouth out then and have been cautious ever since.

So my dilemma is this - I really want to taste the flavors of the food itself and not necessarily accompanied by a taste-masking fireball. My solution? Make my own harissa!

The major ingredients in a traditional harissa include dried chile peppers, garlic, spices and olive oil. Backed by a little research along with trial and error, I discovered that the traditional flavor of harissa can indeed be had without the extreme burn by using both fresh peppers and a small amount of fresh chiles. I ended up using 1 approximate 3” Fresno pepper and the harissa still had a bit of a kick but nothing extreme, and no lingering burn-your-mouth-out effect. So if you’re like me and prefer a lighter touch, know that you should eat (and cook) according to your own palate’s preferences.

So let’s forego the store-bought version and discover an harissa of our own that’s actually quite flavorful and simple to make. I’ve adapted the recipe from the fabulous Jerusalem: A Cookbook by Yotam Ottolenghi and Sami Tamimi.

We will be using fresh peppers and chiles, whole spices including cumin, coriander and caraway since whole seeds make such a flavor difference, and aromatic onions and garlic. I’ve also added a small amount of smoked paprika for a hint of smokiness. What’s not to like?

Of course, the beauty of this recipe is that you can vary the heat to your palate. The rule of thumb should always be to start out as mild as possible and add heat as you go. It’s always easier to add heat than to subtract it. See more on varying the spice level in the recipe below.

Now I look forward to making all those mouth-watering recipes containing harissa that I’ve been procrastinating on… and I’ll start with Melissa Clark’s stunningly beautiful Harissa Chicken. 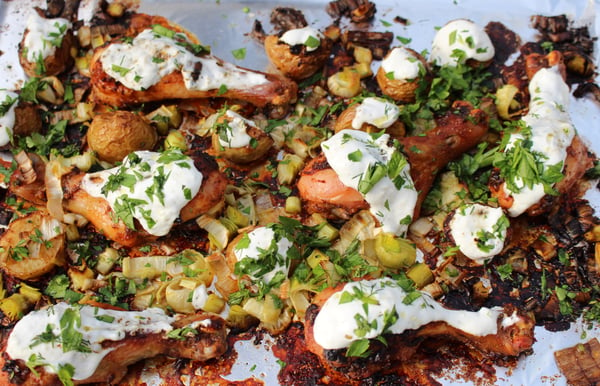 But this versatile harissa can be served with any grilled meat or seafood, stirred into soups and pastas, added to a shakshuka, couscous or tagine. Absolute deliciousness.

Our TCB chefs make good use of harissa as evidenced on their blogs. From Harissa Sirloin featured in a Cook the Book class highlighting another Ottolenghi cookbook SIMPLE, to a simple dip for crackers to a sweet potato curry - the options are virtually endless.

As the summer gets underway, imagine how your homemade harissa can be incorporated into a variety of foods as you participate in our virtual cooking classes. See how creative you can be and share the fruits of your labors in our private Facebook group.

adapted to my taste from Jerusalem : A Cookbook by Yotam Ottolenghi and Sami Tamimi

1. Preheat the oven to 425ºF. Place the peppers on a sheet pan lined with parchment paper. Roast until nicely charred and soft, about 30 minutes. 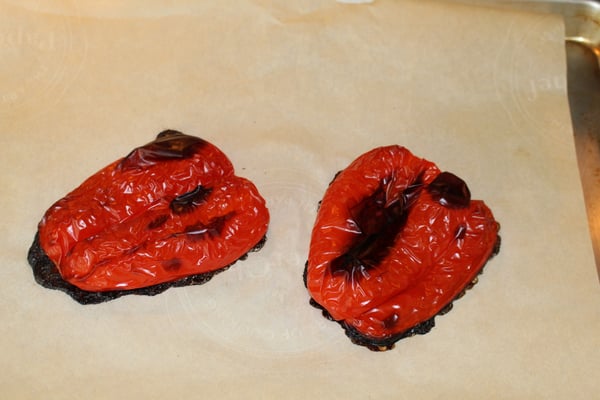 2. Transfer peppers to a bowl, cover with plastic wrap and allow to cool. Peel the pepper and discard the skin. Coarsely chop and put in the bowl of a food processor.

3. Place a small, dry frying pan over medium heat and toast the coriander, cumin and caraway seeds, stirring often, until they begin to darken and release their fragrance, about 4-5 minutes. 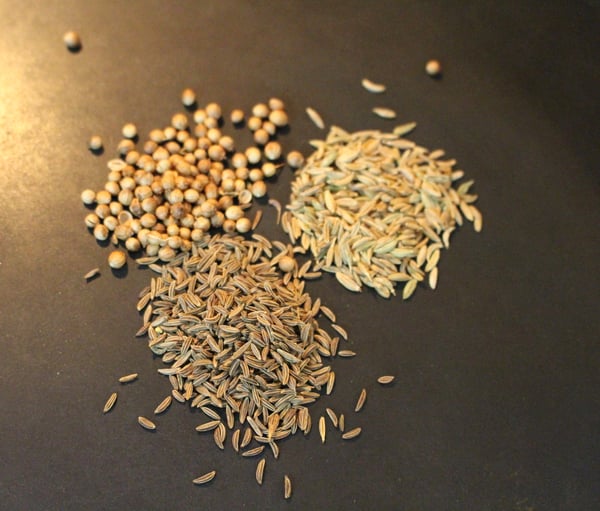 4. Grind to a powder with a mortar and pestle or a spice grinder. Add spice powder to the processor. 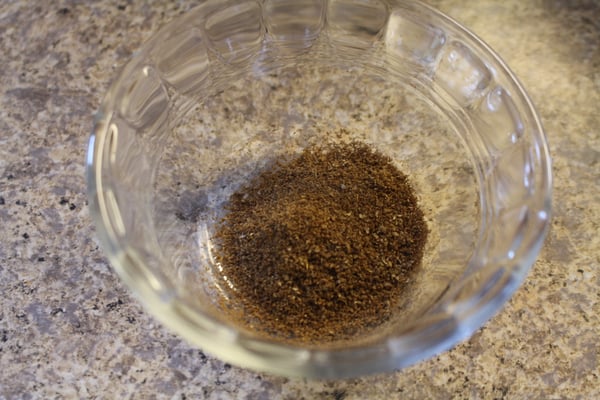 5. Heat the olive oil in a frying pan over medium heat, and fry the onion and Fresno chiles for 8-10 minutes, until they begin to caramelize. Add the garlic and sauté anther 2 minutes or so until mixture is golden. 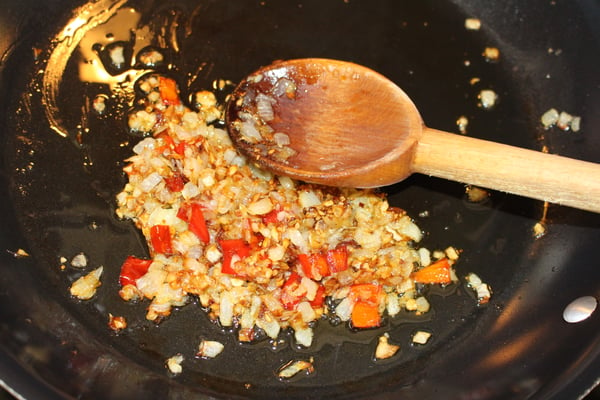 6. Add the caramelized onion mixture along with any remaining olive oil in the pan to the food processor. Add lemon juice, tomato paste, paprika and salt. Process all ingredients until smooth, adding more olive oil if needed. Taste the harissa and season to taste with more salt and/or lemon juice. * 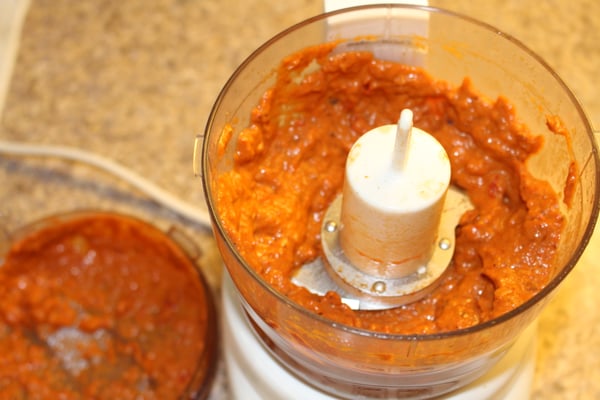 7. Store in a jar in the refrigerator. Makes approximately 1 cup of harissa.

If you think the harissa needs spicing up, you can use more Fresno peppers and/or retain the seeds and membranes. You can also add more heat at the end with the addition of red chile flakes or cayenne pepper. On the other hand, if you feel your harissa is too spicy, you can add more roasted bell peppers to tone it down.