Use a Cast Iron Pan To Cook Breakfast, Lunch, Dinner and Dessert

I’m often asked when teaching a cooking class about the virtues of cast iron. It’s one of the easiest questions to answer, as well as one of the most difficult ones. Most home cooks love the thought of cooking with cast iron. What frightens them the most are several myths that could be associated with cast iron. Hopefully I can dispel some of those myths by showing you just how easy it can be to prepare a complete dinner using cast iron

Practically every delicious food memory I have came from my childhood: the smell of bacon frying, steaks searing, homemade gravies, fried chicken, biscuits and so many other dishes that happened in both of my grandmothers' kitchens. They were raised in the South, and they both grew up using cast iron for practically everything they cooked. It was always their go-to pan.

One of the myths about cast iron is that you have to pamper it and be gentle with it. But the reality is that cast iron is tough! There’s a reason why you will hear people telling you about the cast iron skillet that was handed down to them from their grandparents, whose parent handed it down to them. Or that you can always find decades old cast iron pans at yard sales or antique shops. They’re seriously built to last and could do so for up to 100 years or more!

Another myth that surrounds cast iron is cleaning it. Students always ask me whether it's okay to use soap on their cast iron pans. The theory is that there is a thin layer of oil that coats the inside of the cast iron skillet. Soap is designed to remove oil so therefore soap will damage the seasoning of your cast iron.

The truth is that the seasoning on your cast iron is actually a thin layer of polymerized oil. In a properly seasoned cast iron pan, the oil has already broken down into a plastic-like substance that has bonded to the surface of the metal. This is what gives well-seasoned cast iron its non-stick properties, as the material is no longer actually an oil, so the surfactants in dish soap should not affect it. So go right ahead and use the soap! What you shouldn’t do is let your cast iron soak in the sink. Try to minimize the time it takes from when you start cleaning to when you dry and re-season your pan.

Cast Iron Myth #3: Use Gas Only

Another myth is that cast iron pans should only be used on gas burners. I actually adhered to this rule myself until I did some extensive research on the do’s and don’ts of cast iron. Turns out, not only can you use cast iron pans on gas cooktops and in a hot oven, they can also go on your outdoor grill. I also discovered it’s okay to use cast iron pans on a variety of cook-top ranges, including ceramic, electric, induction and glass.

The other day I thought about not only cooking an entire meal with cast iron, but also cooking a day’s worth of meals using cast iron. I didn’t do it all in one day but rather spread it out over a few days.  One of the first recipes I came across in my research was a cornbread recipe. It was a pretty standard cornbread recipe, except for the exotic additions of dried black mission figs, feta cheese and fresh rosemary. I could work with that and make it my own!

Now I needed a main dish that would complement cornbread. I decided on flank steak so I marinated it, then seared it in a hot cast iron skillet, and finished it in the oven until it was medium rare.

Good thing I have several cast iron pans in my collection, because now I’m thinking about dessert. It’s the beginning of the fall season, my favorite time of the year. One reason is because there are huge varieties of apples available in stores and at farmer’s markets. For dessert, I made an apple crumble using my favorite apples in the world, Honey Crisp. The apple filling consisted of golden raisins, currants, lemon zest, cardamom, cinnamon, fresh vanilla bean and dark rum. It was topped with an all-purpose flour, brown sugar, granulated sugar, butter, cinnamon and nutmeg crumble. Into a 350-degree oven for 45 minutes and out comes an apple crumble that is to die for! 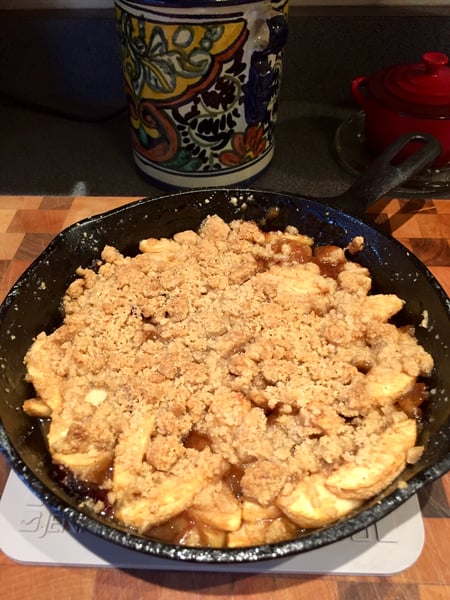 With the last cast iron pan in my collection, I decided to make a topping for the flank steak of blistered heirloom grape and cherry tomatoes with caramelized shallots and a chiffonade of fresh basil. 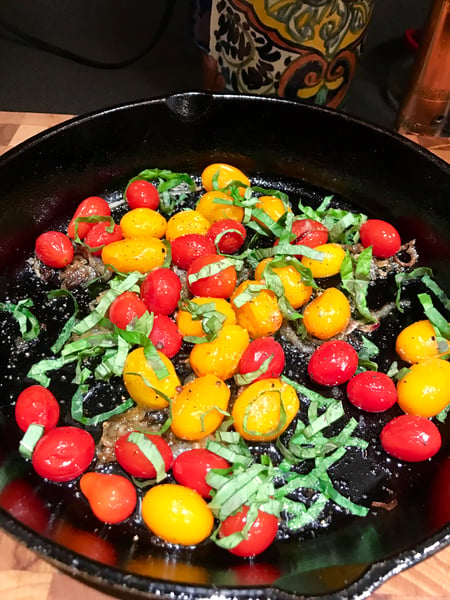 What is not a myth is that acidic foods like tomatoes, beans and certain wine-based sauces can damage your pans’ seasoning. So it’s a good idea to make sure that the seasoning properties of your pan are well established before cooking these items in your pan. It might also be a good idea to re-season your pan afterward. The dinner was completed with a side dish of toasted quinoa with sautéed shitake mushrooms, diced zucchini and sliced scallions. 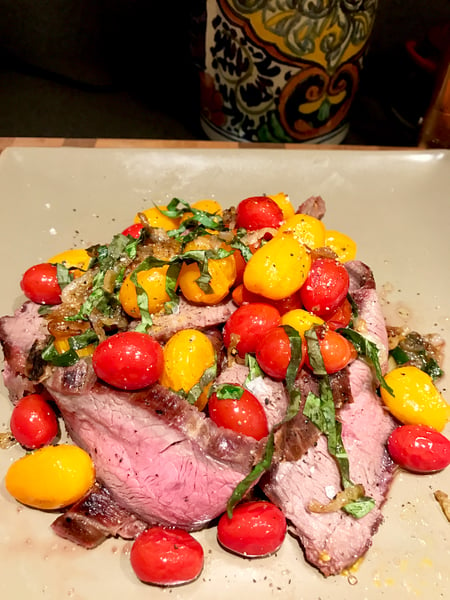 Below you will find the recipe for the skillet cornbread.  One of the great things about this recipe is that you can substitute any of the additions that are included. If you’re not a fan of dried figs, how about using dried apricots or dates?  Prefer not to use Feta? Substitute another cheese. There are several herbs you also could use to substitute for fresh rosemary; you might even want to try adding some thinly sliced scallions. 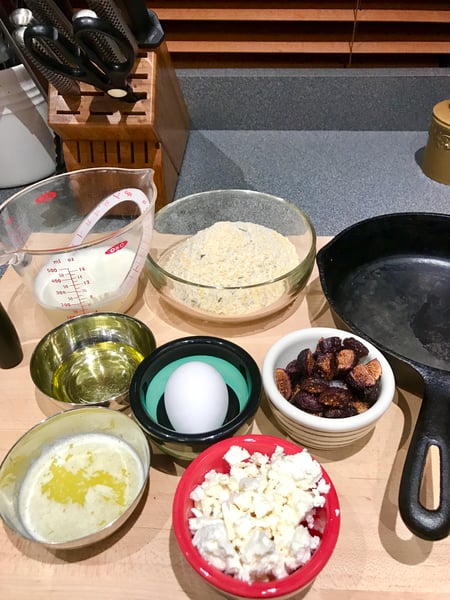 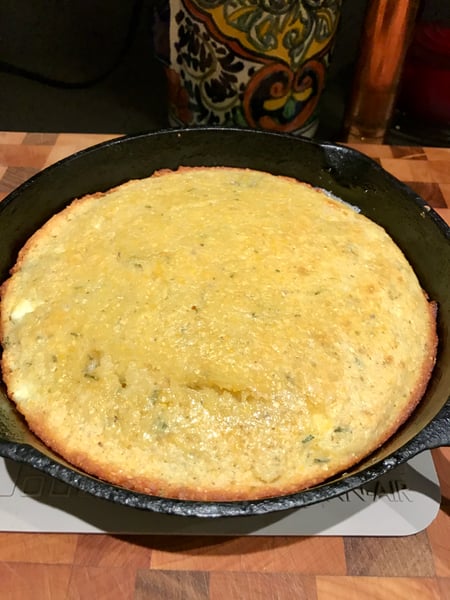 I’m sure you’ve heard that breakfast is the most important meal of the day and I agree 100%. I grew up spending weekends at my grandparents and my grandmother would make the most gigantic breakfast you could imagine. She would make it all in cast iron, so I thought I should too. I settled on scrambled eggs with turkey sausage patties, biscuits and hash browns.

My grandmother would make some of the most tender, fluffy and flaky biscuits that you’ve ever tasted. Since her passing, I have been only able to find one place that could match her biscuits.  It was a restaurant called Gladys’ on the far south side of Chicago, and it closed down years ago. Since then I’ve been on a sort of crusade to find or recreate her biscuits, all to great failure. I’ve never been able to conquer baking biscuits. Mine have always turned out tough, flat and like bread, with very little flavor. I could never accomplish the gathering of the dough, rolling it out and cutting the dough using biscuit cutters properly.  But on that Sunday morning I decided to give baking buttermilk biscuits in a cast iron pan one more try. Maybe it was my grandmother channeling her biscuit baking skills into my hands that day, but I finally did it! I conquered biscuits!  They were light, fluffy, buttery and really tasty. 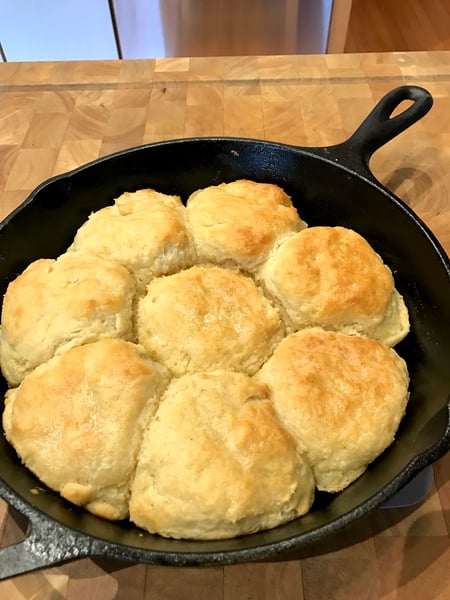 I love crispy shredded hash browns, and they work perfectly in a cast iron pan. After peeling and shredding a couple of Russet potatoes on the largest holes of a box grater, I wrapped them in a kitchen towel, and twisted to squeeze out as much of the liquid as possible. Then place the potatoes on a plate lined with a couple of paper towels and put them in the microwave to cook for 2 minutes. This was a method that I had heard about and finally decided to give it a try. By combining the two methods of squeezing the liquid from the potatoes and microwaving, the potatoes become lighter, airier inside with a crispy, crackly exterior.  Next add a tablespoon of vegetable oil to the cast iron skillet over medium heat. When the vegetable oil begins to shimmer add a tablespoon of unsalted butter and melt. Then quickly add the microwaved potatoes in one thin layer on the bottom of the pan, flatten the potatoes using a spatula and season with salt and pepper.  Cook the potatoes until golden brown on the bottom, which should take about two minutes. Flip the potatoes with the spatula and brown on the other side about 2 minutes longer.  Carefully remove, drain on a paper towel lined plate and serve immediately. 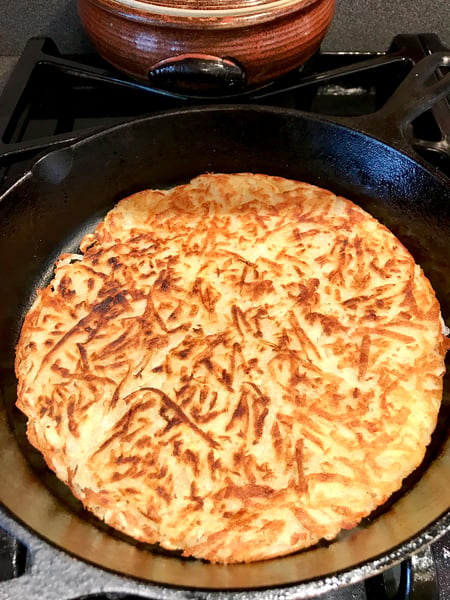 I rounded out the breakfast with a couple of turkey sausage patties that I made with fresh sage, crushed fennel seeds and crushed red pepper flakes. I also made scrambled eggs and both the sausage patties and the scrambled eggs cooked perfectly in the cast iron skillets. Don’t be afraid to scramble eggs in cast iron.  If your pan is properly seasoned, it will have a natural, easy release property to it.

I really like making Dutch Baby Pancakes and work well in a smaller cast iron skillet. I pulled out my 6.5-inch cast iron skillet and made a small Dutch Baby Pancake with fresh blueberries, that also included a generous sprinkling of powdered sugar on top.  With the addition of the blueberries and lemon zest in the batter, it gave the pancake a fresh, fruity and citrusy flavor. 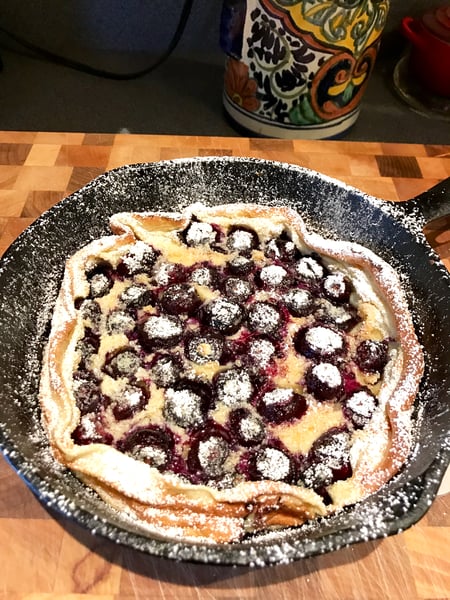 Frittatas are always great for breakfast, brunch or a light lunch. Once again, I pulled out my 6.5-inch cast iron skillet to make a frittata with sautéed leeks, cremini mushrooms, fontina cheese, parsley and fresh thyme. I had the frittata with a bibb lettuce salad, dressed in a red wine vinegar and shallot vinaigrette. It was simple, light and not your typical lunch sandwich. 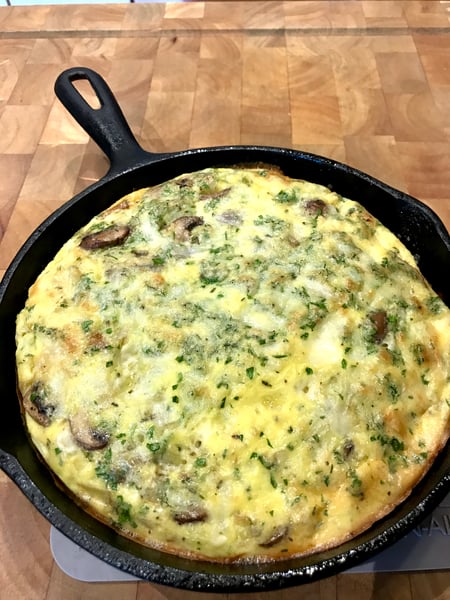 Here are a couple of extra tips regarding cast iron:

At The Chopping Block, we use cast iron skillets practically daily in our kitchens. We also use cast iron grill pans a great deal as well. If you’ve ever taken a cooking class with us, had a private event or just visited any of our kitchens, you'll notice that we keep a generous supply of cast iron skillets and grill pans stocked in our kitchens. That's because we believe in the advantages of using cast iron as cookware. Cast iron can impart a great sear and crust on meats; it can withstand high temperatures on the stovetop as well as in the oven. And as I’ve shown, it can be used to create a variety of meals.

With the holiday season fast approaching, you can let our chefs handle your holiday apple or pumpkin pies for your Thanksgiving meal. And guess what? Our famous Apple Pies are all baked in a cast iron skillet!