Were you a "good eater" as a kid? If you weren't - how old were you when that finally changed?

I wasn't a good eater until I was 40 & finally took up cooking. (Really.) I remember being a kid in the 1970's & my Dad was traveling or my parents were going out on a Saturday night & my Mom would give us a TV dinner. I thought that was winning the kid lottery! And, I'm sure she thought that was winning the Mom lottery - just pop that bad boy into the oven, warm it up and serve! Result: happy kids. If I had kids today, I certainly wouldn't give them what one of those contained, but back then we weren't as aware of what was going into our food as we are now. American culture was changing in a big way then, and TV dinners and other prepared foods were becoming part of the norm. 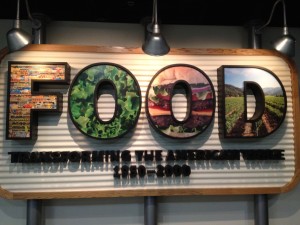 In November 2012, the American History Museum at the Smithsonian opened a new (permanent) and really interesting exhibit, titled: Food: Transforming America's Table, 1950-2000. Julia Child's kitchen, which is worth seeing in and of itself, is at the center of this exhibit. It's not a huge exhibit, but it's really interesting and well done. (On a side note, I happen to be friends through the Kitchen & Bath Industry, with the person who did the work with Julia Child to ensure her kitchen was installed at the Smithsonian, just as it was at her house in MA. It's been fun over the years, to hear his stories regarding this experience and how he became friends with her during through it.)

Anyway, to quote the Smithsonian, and best describe what you'll see if you go, whether convenient, fast, organic, processed, gourmet, ethnic, or local, the foods available to Americans have never been more plentiful and diverse, or more ripe for discussion. Coupled with big changes in who does the cooking, where meals are consumed, and what we know (or think we know) about what's good for us, the story of Americans and food in the last half of the 20th century is about much more than what's for dinner. Through the exhibit, you'll learn about the social changes that have changed how we eat in the following sections:

One of the Smithsonian's most popular artifacts, the kitchen contains the tools, equipment, and furnishings arranged exactly as they were when Julia donated it to the museum. She was an important force who changed the way many Americans think about and prepare food; she inspired many cooks to venture into unfamiliar cuisines and encouraged them to enjoy cooking and to share the pleasures of the table.

Explore the innovations behind some of the major changes in food production, distribution, preparation, and consumption since the 1950s. Learn about the rise of large-scale, centralized agriculture, the expansion of manufactured "convenience" foods, and the tremendous increase in drive-thru and on-the-go dining.

In this section, there were so many interesting food facts! For example, they cited Iceberg Lettuce, of all things in American food - as a "game changer!" Not only was it being consumed more than any other veggie in the U.S. back in the 1950's, it was considered a "seasonless vegetable" because most of the crop came from CA and would grow year round there. Then, repurposed WWII technology changed how that lettuce was getting across the country to the consumer, with less spoilage.

They also delved into how agricultural researchers were developing new ways to control pests and weeds - one result of this is Canola oil. And, what year would you guess the idea of "bagged carrots" hit American grocery store shelves? If you 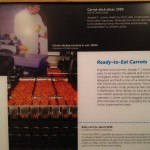 guessed 1959, you would be right! That was the year Joseph T. Listner built a one-of-a-kind machine to slice raw carrots into sticks. There was so much more here: how supermarkets became symbols of superior living standards in the U.S. as we waged war against Soviet communism; how postwar food prep appliances came to be (think microwave - "Halt the 'hungries' in a hurry!") and promises made to have us believe convenience food was as "good as homemade." 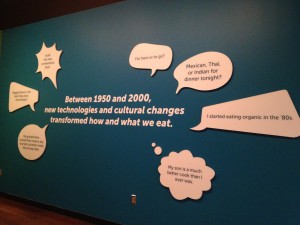 What made me stop and think in this section of the exhibit was the moment I read, "in the last half of the 20th Century, America became a nation of snackers." New option after new option was made available to us. Think about it - snacks became portable, they weren't always that way. No need to just eat them at home any longer! (And, what did we ever do before microwave popcorn?) Another thought provoker from this section of the exhibit had to do with Pringles, it read "Pringles (potato chips) are manufactured in over 100 flavors, from cheeseburger to seaweed, targeting consumers worldwide." We forget the manufacturers target even regional taste buds (which accounts for why I can't find Pepsi with Lime in FL when I visit my parents there, but it's on the shelves of the grocery store I can walk to down my Chicago street). If you've ever been to the Coca-Cola museum in Atlanta, at the end, you can walk though "soda heaven" and you are welcome to try Coke's different flavored soda offerings, which target different taste buds in countries around the world.

This is the first section of the exhibit and I have to say, it gives you cause to stop and consider how we got to what we are eating today.

How have social and cultural movements affected what's on the table in America? Explore the role of new immigrants in introducing new flavors. Learn how shifting gender roles, working patterns, and family life have changed the way we eat. Examine the roots of movements embracing local, fresh, and organic foods.

I thought this section of the exhibit was the weakest. It needed more "umph!" I did get a kick out of the BBQ aspect of the display, likening males' new interest in cooking in the 1950's/BBQ to the caveman. You know: stick, meat, fire.

Exploring "working patterns" in the kitchen hit home. My family has been in the Kitchen & Bath Industry for 3 generations and how we live and function in the heart of the home has changed since my Grandfather started designing home kitchens at the local department store in the mid 1950's! Today, there are designations for CKDs (Certified Kitchen Designers) & CMKBDs (Certified Master Kitchen Bath Designers). Stop for a moment to think about older homes versus that of newer homes. Newer homes have a much more open floor plan, incorporating the kitchens into the living and dining spaces. The kitchen is no longer a cordoned off area, as it was in homes built in the first half of the 1900's. When we entertain friends & family in our homes, "the party always ends up in the kitchen," as they say. With the advent of super stores like Costco, we are even storing our food differently, due to the "Costco effect." We simply buy in a larger quantity than we used to. Hence, kitchen designers began designing storage differently for kitchens in the 1990s.

The tremendous growth and expansion of wine and winemaking is an important story in postwar America. Discover how new technologies, innovators, and changing attitudes led to the production of wine in all 50 states by 2000. 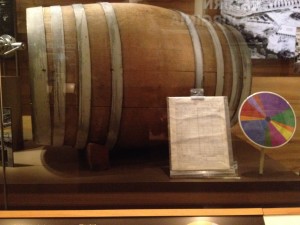 I love wine and I'm always interested in anything wine! It was fun to learn more about wine tourism in CA, how the origins of the Zinfandel grape were determined and read about the research behind "Degree Days" which determine what grape is planted where. I'm going to quote the Smithsonian's story here on "Degree Days." 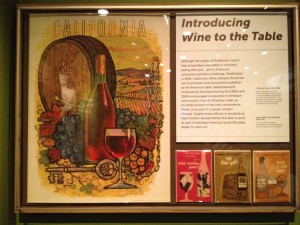 In the 1940's, University of CA scientists Maynard Amerine and AJ Winkler studied the wine producing regions of California. They recorded the "degree days," the number of degrees above 50 degrees per day between April 1 and October 31st, the growing season for most grapes. This research established the effects of climate and grape variety on the quality of wine and became the basis for the recommending specific grape varieties for each region. The advice was put into practice in the 1960s when new investors enabled growers to replant. The methodology was adapted by growers in other parts of the country and around the world.

There is so much more to this exhibit. I could keep writing and writing and writing. My advice is to see it yourself next time you visit the Smithsonian. It really made me stop and think about how American diets have been impacted by social and technology changes in the last 50+ years.

Have you seen the Food exhibit? If so, please share your thoughts with us here.