It took awhile this year, but Summer is finally here and for me, that means easy, breezy everything! I like to cook outside more, heat up the inside less, eat with minimal preparation – and so much of Summer’s bounty lets us do just that. When I start thinking of Summertime desserts, the first thing that comes to mind is fresh fruit – there’s just so much available. Right now it’s all about strawberries for me: they’re so sweet and juicy, they don’t need a lot of fuss… perfect!

I just picked up some strawberries at the market this morning, so I started to think about making a light dessert for tonight. But what could I serve them with that didn’t need a lot of preparation? As I poked around my refrigerator, I ran across half a package of phyllo dough left over from a recipe I was trying out about a week ago. Now, phyllo dough doesn’t always hold up well once the package is opened; it just dries out really easily. But I guess the stars were aligned in my favor! I had wrapped it really tightly in plastic wrap, and while it wasn’t in perfect form for making a nice layered baklava, it should be usable for something. What came out of this was so easy, fun and delicious, I just had to share!

First I spied my jar of cinnamon sugar that I keep handy… it’s so simple, but one of my favorite things. 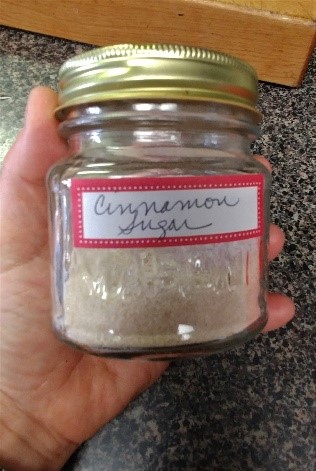 Just mix up some granulated sugar with cinnamon to your taste – I happen to like mine very cinnamon-y to perk up just about anything for breakfast like cinnamon toast, bagels (mixed with cream cheese), French toast and pancakes. Don’t forget about apple sauce (your own or store-bought), apple pie and coffee cake. And yes, I’ve been known to sprinkle it on popcorn, as well!

Next, I melted some butter. 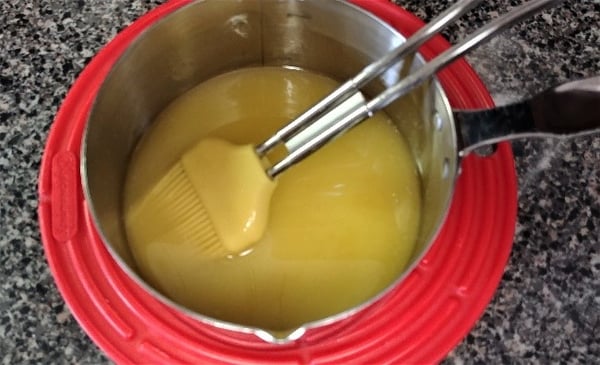 Then I carefully unrolled those phyllo sheets and placed one on a plastic mat. I hated to get my wooden cutting board all greasy with butter, same goes for the counter top. So this plastic mat was perfect. I brushed on some butter. 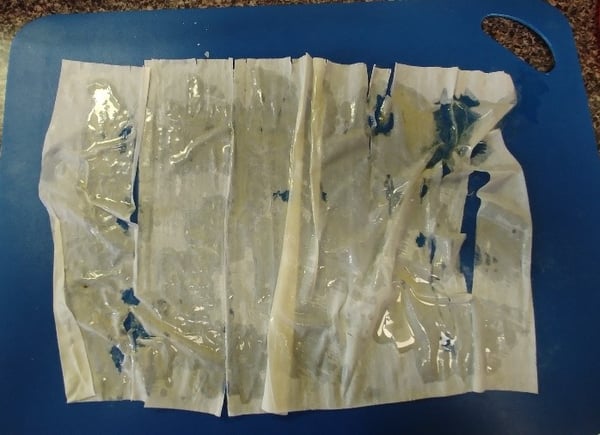 Actually, I had to do more “dabbing” than “brushing” as these sheets were super-fragile at this point. And you can see that this was by no means “the perfect phyllo sheet.” It’s torn & a little bit dry on the edges, but just you wait! I sprinkled on some of the cinnamon sugar. 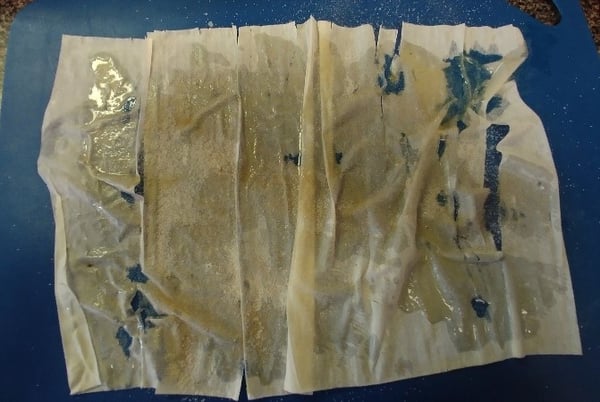 I know these photos look pretty similar, but I wanted you to see that I was pretty generous with the cinnamon sugar. Can you see the change in color?

Lastly, I scooped up the whole thing in my hand and lightly scrunched it into a loose ball. 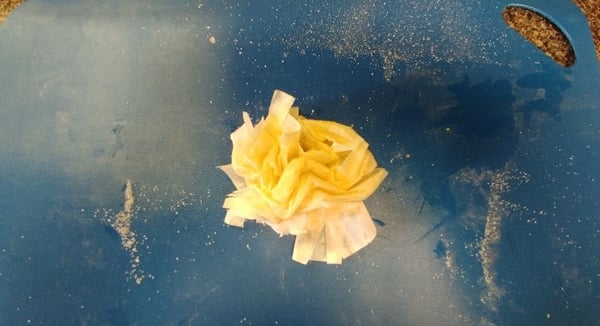 Seriously, I did nothing special, but see how light and ruffled it looks? This was turning out to be pretty fun – and it was about now that I thought this might even be something to blog about. (Trust me, not every experiment makes it through!)

I repeated this with five more phyllo sheets and placed them on a sheet pan lined with a Silpat (you could also use parchment paper). I didn’t want to heat our home up with a lot of oven heat so I decided to use the small countertop oven we have. This meant using a smaller quarter-sheet pan, about half the size of the normal size you would typically use for baking cookies – so I was only able to fit six phyllo bundles on the pan. 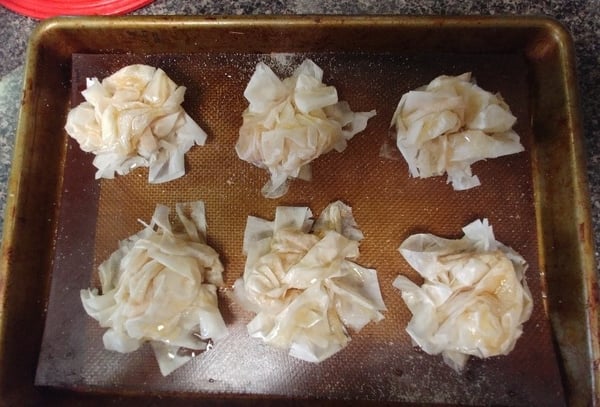 Once they were on the sheet pan, I dabbed just a tiny bit more butter on the tops and added a quick extra sprinkle of cinnamon sugar.

The oven was preheated to 350⁰F and I used the convection mode. If you don’t have a convection option (my larger oven does not), I would still keep the heat at 350⁰ because there is a lot of butter on these and things will get smoky quickly if the heat is set too high. I baked them for about 15 minutes. If you don’t use convection, you may need to bake them a little longer, just keep an eye on them. You’re looking for a nice golden brown color. 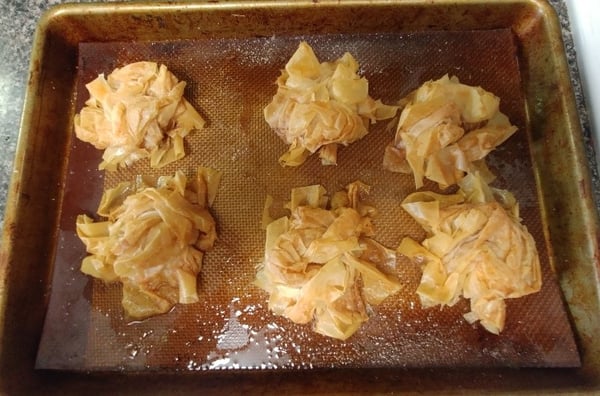 They came out all golden and crispy and scrumptious looking! I lifted them off with a spatula and set them on a rack that I had lined with a layer of paper towels, just to absorb any extra butter. I wanted the bottoms to stay crispy, not get soggy as they cooled. I had enough phyllo sheets to make four more and added them to cool on the rack with these original six.

While they were cooling, I hulled and halved a bunch of strawberries. I set the strawberries in the center of a platter and surrounded them with the phyllo bundles, sprinkling everything with the lightest dusting of confectioner’s sugar. 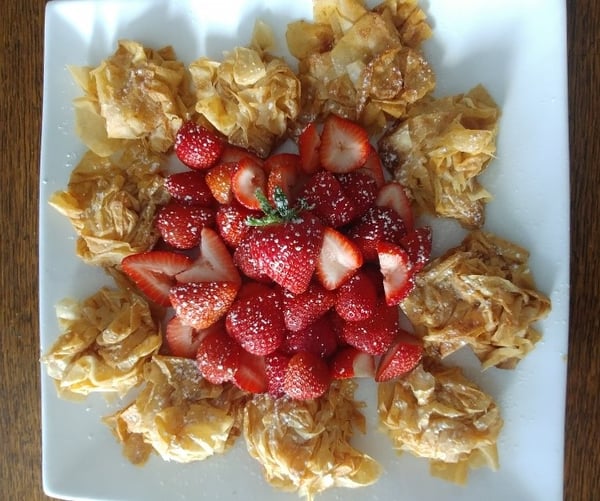 So pretty and charming – and it just screams “Summer is finally here!”

The Chopping Block offers an abundance of classes that focus on Summer specialties! In June, think about Tiki Time, Summery Eats & Drinks, Summer Southern Comfort, Summer Pie & Tart Boot Camp and Lemon Lovers. And, of course, our outdoor grilling patio at the Lincoln Square location is in full swing, featuring Summer specialties such as Grilling Fiesta, Campfire Cooking, Beef on the Grill, Argentine Grill, Shellfish on the Grill and Chicken on the Grill. Hope to see you there!