The Best Home Deep Fryer is Your Wok

That’s right, more wok content. If you’re a devotee of The Chopping Blog, you may be familiar with my previous work regarding the most versatile pan (that should be) in your kitchen: the wok. In my past posts, I covered the very basics; what a wok is, how it works, and why, as well as some of the basics of the most common cooking technique for which woks are employed (stir frying). Well that's all well and good of course, but it doesn’t do too much to illustrate the versatility of the wok as a do-it-all wonder-pan. So let's get into some of the more unsung uses for it shall we? Specifically one: deep frying. 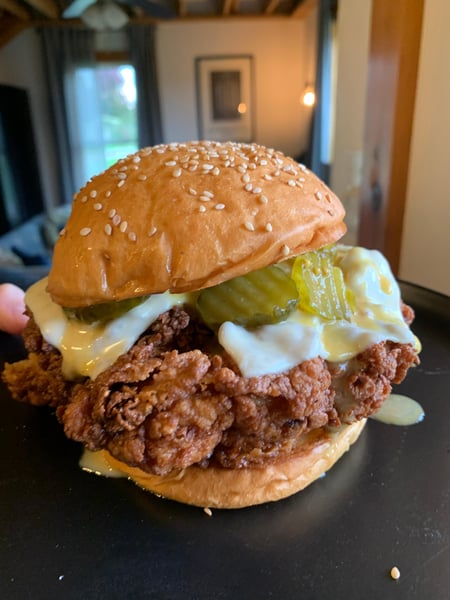 For a little while now, I have been neglectful in my husbandly duty of providing my wife with delicious crispy fried chicken sandwiches when she is craving them. One of the reasons for this is that deep frying at home is not a very user-friendly endeavor. It is too often messy, smelly, and just doesn’t produce ideal results.

There are a number of reasons for this. It’s messy because oil splatters everywhere and the walls on the pots we tend to use aren’t tall enough to prevent the oil splashing over, and if they were they would be cumbersome to use and load food into safely. It doesn’t produce ideal results because once food is added to the oil it tends to just fall to the bottom of the pot where it gets overheated from going into direct contact with the metal, and because almost without exception home burners are not powerful enough to maintain the ideal frying temperature once food has been added. Interestingly, this last problem is something that both wok cooking and deep frying at home have in common: insufficient BTUs. We’ll come back to this.

As an aside, let's just briefly discuss those countertop deep fryers that some devotees of the form have at their homes (I’ve even seen them used in some professional kitchens). I'm talking about those units that look like restaurant deep fryers, just in miniature. They have the special baskets, the right look, and whoever is selling them insists that they are the best way to get restaurant-quality results at home.

However, these units are typically lacking in two areas. The first is power. Pretty much all the time these are heated with electric resistance coils that sit near the bottom of the basin where you add the oil. This means they are limited by how much power they can draw from a typical 120 volt outlet which, spoiler alert, is nowhere near enough to quickly recover the heat of the oil once you’ve added a batch of just about anything to be fried. The second is a little less obvious. In commercial deep fryers there is zone of oil about 3-5 inches deep below the tube burners that never gets as hot as the rest of the oil in the fryer. This is called the cold zone. The purpose of this is to prevent bits of whatever you’re frying from falling to the bottom and burning, thus degrading your oil more quickly and flavoring it with acrid burned food. No home deep frying method has a solution to this problem, but in general, the more oil you are using to deep fry, and the deeper your vessel is, the less of an issue it will be. Unfortunately using a ton of oil in a super deep pot greatly exacerbates the first problem.

Now while a wok can’t solve the cold zone problem, using a wok as a deep frying vessel has a couple of big advantages. First, since it is bowl shaped, you can fry a lot more food per batch than just about any other pot. This is because as you add food to the oil, and the oil level rises, the diameter of the pot increases dramatically. This means you have to add way more food the get the oil to rise the same amount as it would in a typical straight sided pot. Furthermore this also prevents excess splattering or splashing. Since the top of a wok is so much wider than the bottom, it's much more likely that any splatter will simply land back in the wok rather than on your kitchen counters. Second, if you’re using a wok at home there’s a chance you may have taken the plunge and procured yourself a purpose built wok burner. Unfortunately since my previous wok posts my charming charcoal fired wok burner succumbed to inclement weather (it was blown off my outdoor table during a thunderstorm and shattered into dozens of pieces). However since then, I decided it was time to graduate to a real gas fired wok burner. I opted for the Eastman Outdoors Kahuna Wok burner. This burner puts out about 65,000 BTUs. Way less than a restaurant grade wok burner (less than half), but way more than enough for home use, and an excellent amount for regulating oil temperature during deep frying.

But enough blathering on about the technical merits of deep frying in a wok on a big outdoor burner (outdoor being an important part of this setup). This solves the second major problem of home deep frying (smelliness). 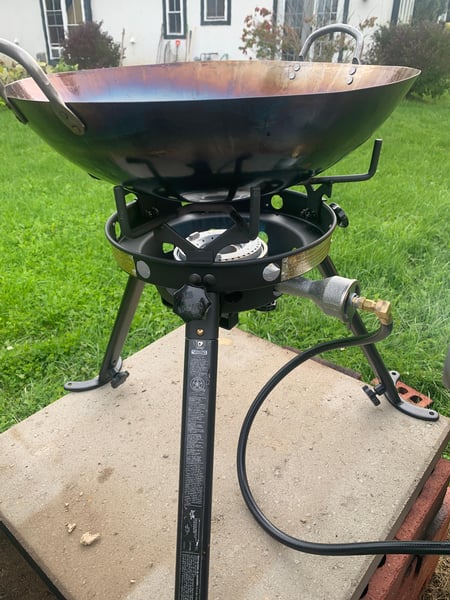 First, get your wok situated over the burner. 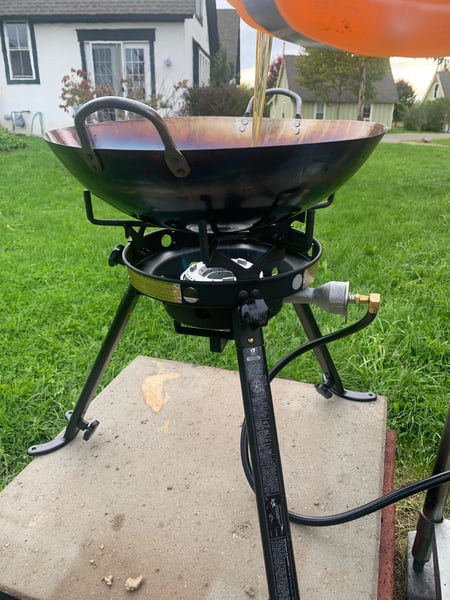 While the oil heats up, prepare your delicious chicken legs for frying.

Carefully add them to the hot oil. 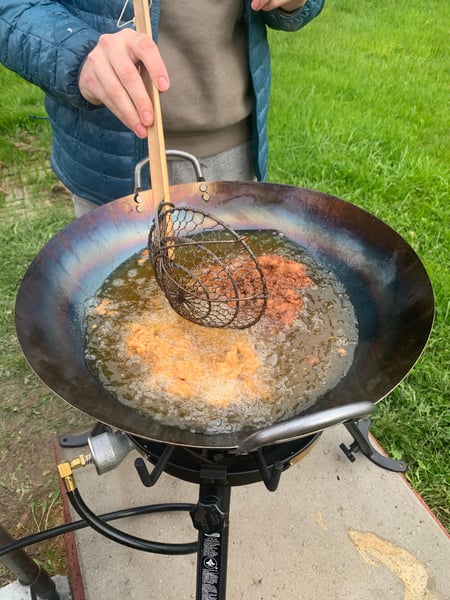 I use a spider to move them around in the oil as necessary, but you could use tongs as well. 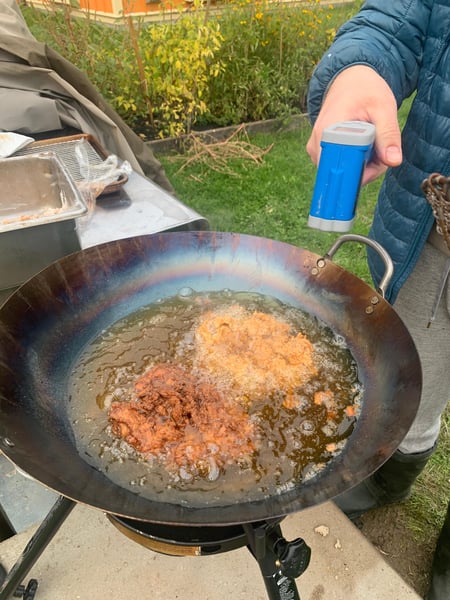 One of the few downsides of using a wok for deep frying is that you can’t use a typical deep fry thermometer that clips onto the side of a straight sided pot. You can use a digital instant read thermometer instead, or, as I am here, an infrared thermometer to take a temperature from a distance. 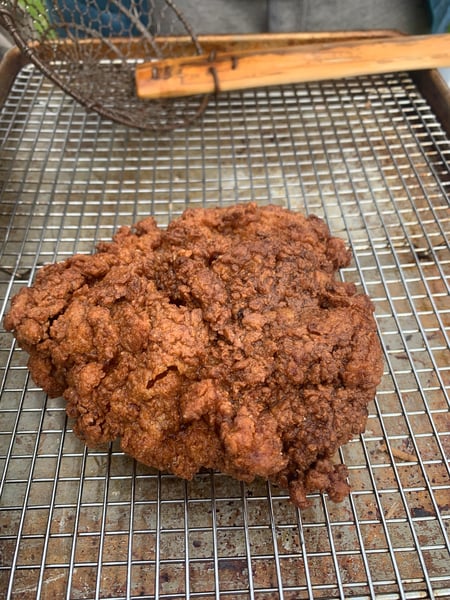 When your chicken is crispy and golden brown, remove it from the oil and let it drain on a rack. 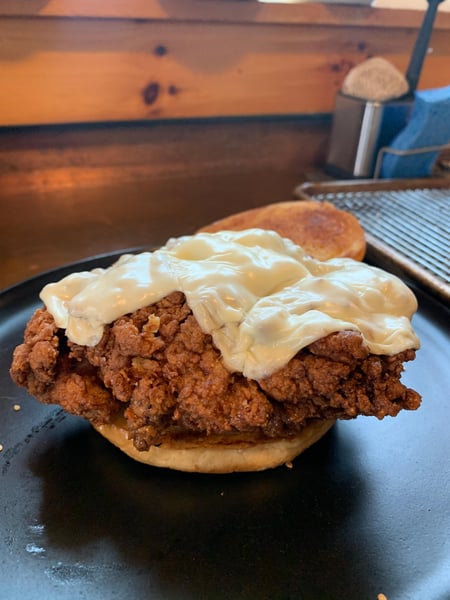 Melt some cheese on top (not optional), and place it on a lightly toasted bun. 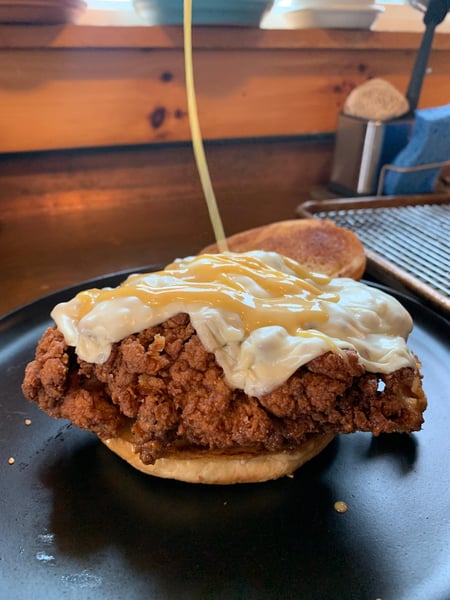 Drizzle on some secret sauce (it's honey mustard mayo).

Blast on some bread and butter pickles. 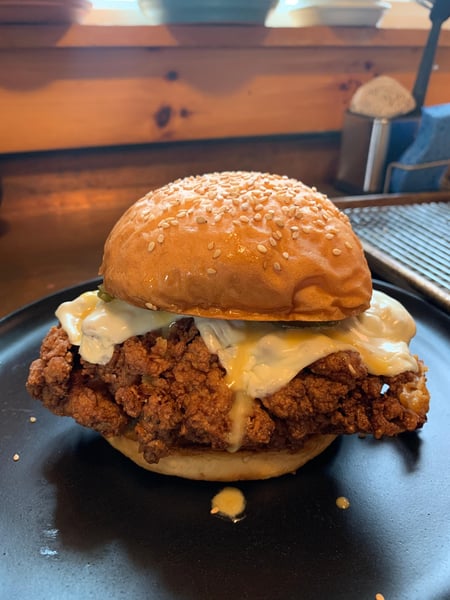 Then add the top bun and feed to your eagerly awaiting guests.

After you’re done, the oil in your wok will cool much faster than it would in a typical pot (thin material, wide surface area), so you can strain it and get cleaned up much more expediently, and if you do happen to have a purpose built wok burner you will be able to get much faster, much more even results because the burner will be powerful (read: terrifying) enough to quickly recover the temperature of the oil once food has been added.

I hope this has helped to show you that your wok is more than just a pot for stir frying, but should you wish to enhance yeas stir fry skills a bit more, why not sign up for our upcoming virtual Beef and Broccoli Stir Fry class on Friday, November 4 at 6pm CST? You'll enjoy:

And stay tuned for more wok content that will show you how to use it for even more wonderful techniques.