The Instant Pot is made for Indian Food

Anyone who knows me knows I'm kind of obsessed with my Instant Pot. There are a few foods that I will never make outside of the Instant Pot again such as hard-boiled eggs, pulled pork, lentils and cheesecake (yes, that's right, cheesecake). I'm also making my own yogurt regularly now, because why not? It's so easy! I threw an entire Instant Pot-themed party for my book club shortly after getting this amazing device and now that cooler weather is here, I'm excited to break it out even more regularly for hearty, braised dishes and stews all winter long.

There's one type of cuisine that is absolutely a perfect fit for the Instant Pot, and it also happens to be one of my favorites: Indian food. So when my friend Chandra Ram put out a call for help testing recipes for her new cookbook last spring, I jumped at the chance. It's not often that you get to provide feedback and suggestions for a cookbook! The Complete Indian Instant Pot Cookbook was released just last Friday, November 9, and as I eagerly await my copy to arrive, here's a sneak peak of what you can expect in this new cookbook.

Chandra is the editor of Plate Magazine and co-author of Chef Bill Kim's Korean BBQ: Master Your Grill in Seven Sauces. (You may remember Bill had a sold-out event at The Chopping Block back in June and this is absolutely another cookbook you need on your shelf.)

I asked Chandra about doing two cookbook projects back-to-back, and she replied, "My husband is wondering the same thing! But actually, Bill Kim and I finished the last of Korean BBQ in October of 2017; the book was printed in China, so that took six months. I started working on The Complete Indian Instant Pot Cookbook in December 2017; it was an incredibly tight schedule, but we knew we wanted to get it out this fall, while the Instant Pot is still at the top of peoples' lists. This book was published by Robert Rose, a Canadian publisher that prints in Canada, so the printing process took just three weeks. It was a whirlwind, but absolutely worth it!"

Chandra describes her book as an exploration of the food she grew up eating with her family, what it means for her to feel at home in both America and India and what happens when a “third culture kid” takes traditional recipes into her own hands (hint — some things get Southern as an homage to her Kentucky roots).

Chandra recently told the New York Times that the Instant Pot actually made her culture more accessible to her. That's because previously, she wasn't sold on pressure cookers which are a staple in Indian cooking. The Instant Pot allowed her to delve deeper into her family recipes from India and adapt them to her own Indian-American taste. In her cookbook, there are very personal recipes like corn ki subzi (think Southern-style creamed corn with Gujarati spices) alongside traditional dishes like rogan josh (lamb stewed with yogurt and spices) and dal makhani (creamy spiced lentils). "Before I got my Instant Pot, I felt like I was cooking dumbed down Indian food. Now I feel like I'm doing the real thing."

The Instant Pot is a game-changer for Indian cooking because it replaces a pressure cooker, slow cooker, yogurt maker, rice cooker, bread proofer and steamer all in one. No longer does Indian food have to be intimidating or reserved for project cooking on the weekends. There's no need to soak chickpeas overnight. Homemade yogurt can be made to the tanginess and texture you desire. I found the homemade version to be especially delicious in the Pomegranate Raita I tested for Chandra's book. Of course, if homemade yogurt doesn't interest you, store-bought works just fine too.

That Raita went beautifully with the Potato Pea Samosas I also tested for the cookbook. This dish is obviously baked in the oven but the filling is made entirely in the Instant Pot. First, you use the pressure cook function for the potatoes and then switch to saute for the rest of the ingredients and even mash the potatoes in the inner pot. That means only one pot to clean! Chandra suggests preparing a bunch of these to stock your freezer, so you have them at the ready for samosa-cravings or last-minute guests. 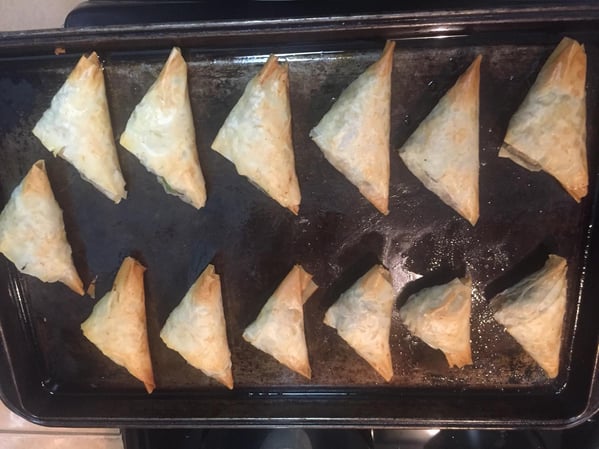 The Complete Indian Instant Pot Cookbook includes 130 Indian recipes specifically designed for the Instant Pot, that are perfect for novices as well as experts. Recipes range from traditional to modern and go beyond the usual classics you see in Indian restaurants. There's Butter Chicken and Chana Masala as well as less well-known regional dishes like dosas, biryanis and dals or lentil stews; and contemporary twists on Indian flavors such as Orange Cumin Salmon and Chocolate Chai Pudding.

Chandra also offers meal plans, easy substitutions and tips for building an Indian pantry. Cooking Indian food has never been as approachable, fast and easy! The Complete Indian Instant Pot Cookbook isn't the only or first Indian electric pressure cooker cookbook. In fact, there are more for Indian food than for any other cuisine. There are also six separate Indian Instant Pot Facebook groups with a combined membership of almost 200,000! I'll be perusing the recipes here as well as my new cookbook to utilize this beautiful turmeric Chandra sent me for helping out with the recipe testing. 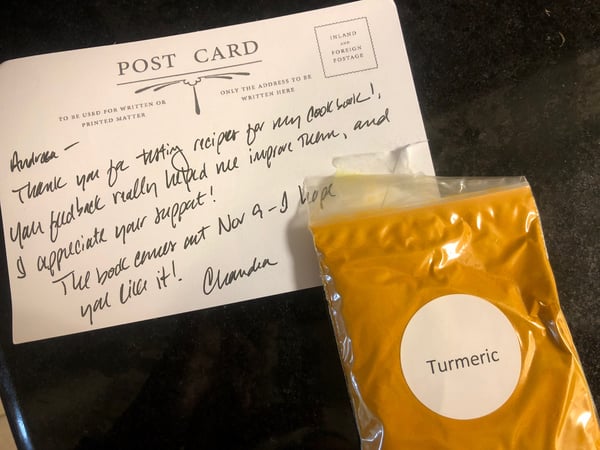 Chandra was kind enough to share one of the recipes from her book for you to try. It also happens to be the perfect addition to your Thanksgiving feast.

This recipe is vegetarian / gluten-free / vegan.

I have been making some version of this soup my whole life, depending on what I have in my kitchen. This is the kind of soup that welcomes change, whether it’s a few parsnips or turnips mixed in with the carrots, a spoonful of curry powder, a little extra ginger or some lemongrass, if you have some on hand. The only rule is don’t skimp on the coconut milk: full-fat milk gives this soup the creaminess that makes it so very good.

Using the Sauté function on High, heat the oil in the inner pot for about 1 minute, until shimmering. Add the onion; cook, stirring occasionally, for about 4 minutes, until softened.

Add the cumin, turmeric, coriander and chili powder; stir to coat the onions in the spices. Add the ginger and cook, stirring, for 1 minute. Add the carrots, salt and water; stir to combine.

Secure the lid and cook on high pressure for 10 minutes.

Once the cooking is complete, let the pressure release naturally for 5 minutes, then quick-release the remaining pressure.

Remove the lid and let the soup cool slightly. Purée the soup with an immersion blender or, working in batches, transfer to a blender and blend on high speed until smooth. Return the soup to the inner pot and stir in the coconut milk. Taste and add more salt, if needed. Garnish with cilantro; serve.

Courtesy of The Complete Indian Instant Pot Cookbook by Chandra Ram © 2018 www.robertrose.ca Reprinted with permission. Available where books are sold.