When I first heard of the Chicago Food Swap a few years ago, I knew it was something special. A food swap is an event in which a group of people who have made something edible out of their love for food shares and trades that food with others. There's no money exchanged at a food swap. Instead, people barter and trade their wares in hopes of trying something new and equally delicious as their own contribution.

It's about bringing cooking and community together, something we're all about here at The Chopping Block. We've been big supporters of Chicago Food Swap in the past, so when we heard there was a book coming out to celebrate swaps, we knew we had to host author Emily Paster for an event. 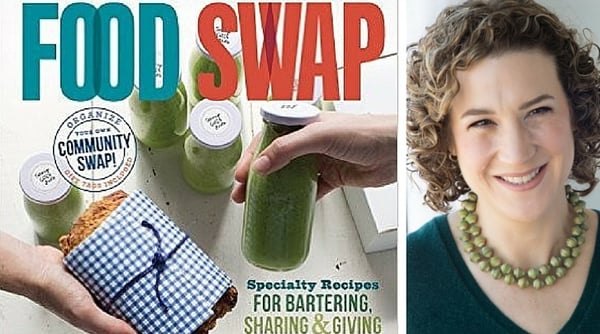 Emily is the brainchild behind Chicago Food Swap and with five years of swap organizing experience under her belt, she became to go-to resource for other food swaps across the country. After offering her lessons learned again and again, she realized there was an idea for a book here. So she wrote Food Swap: Specialty Recipes for Bartering, Sharing and Giving. "There's information on how to hold a food swap itself as well as plenty of ideas of what to bring to a swap. There are 75 recipes of everything from baked goods and candies to soups, dips, sauces, pickles, jams and jellies. I wanted this cookbook to be representative of everything you might see at a food swap," said Emily.

The key to a good food swap item is being able to portion it into smaller quanties. "It's really easy to make a big batch of soup and then portion and distribute," said Emily. Baked goods are also very popular. "People are more familiar with the concept of a bake sales and a cookie exchange. They love to bake but don't want to have a ton of cupcakes around the house. That's why these recipes also make great gifts and are suitable for feeding large crowds," said Emily.

Though Emily developed most of the recipes herself, they were inspired by all of the different items she has seen at swaps over the years. The description in the book for Peanut Butter Buckeyes reads "A member of the Chicago Food Swap community brought Peanut Butter Buckeye candies the first time she attended a swap, and people pounced on them. When the swapper returned the next month with different items, several people, myself included, indignantly asked where the buckeyes were. I had no choice but to create my own recipe."

Writing this book took about a year, in part because Emily interviewed leaders of over 20 different swaps around the country and in the U.K. and Canada. Due to the recent popularity of swaps, there was a lot to choose from. In less than 10 years, food swaps have sprouted up in virtually every major U.S. city, with more appearing each month. Emily also reached out to others for help with topics that weren't her strength. "It's really helpful to call on the swap community for ideas and tips. The presentation part in decorating swap items is not my forte. I simply called the people whose items looked adorable and asked them how they did it," said Emily.

Emily makes the Red Lentil Soup (page 136) from the book all of the time for her family but her personal favorite recipe is Pickled Fennel (page 225). "I adore fennel and when the jars are packed correctly with the fennel, fronds, lemon peel and red pepper, it makes for a beautiful presentation," said Emily.

At an upcoming special demonstration and book signing at The Chopping Block, Emily will demonstrate three recipes from her book: Beet-Tahini Dip, Garam Masala spice mix and Chocolate-Hazelnut Spread. She'll also discuss how you can package these items for a swap, to give as gifts or to feed a crowd. Food Swap will be available for purchase during this event only at a special 10% discount.

The Chopping Block at the Merchandise Mart

Emily may also give a few hints about the book she's working on now on preserving in the Jewish culinary tradition which is due out next year.

Whether you are interested in attending or hosting a food swap or just want some creative gift ideas for the holidays, you won't want to miss this event!