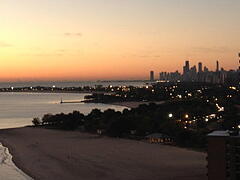 It’s a beautiful day in the neighborhood. The sun is shining, the lake is aqua, and the city looks particularly stunning. Forget the fact that it’s 30 degrees in the middle of October, and forget that we’re probably going to endure about 8 months of winter. Just cuddle up in some warm fleece, crank up some tunes, and dust off your Crock Pot that has probably been hiding in the depths of your kitchen cabinets for months now. The time has come to make some spicy, hearty, Mexican Pozole Verde. 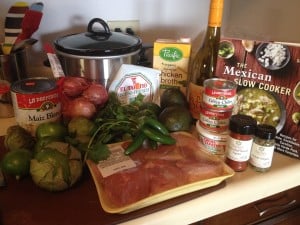 For those of you who have not yet been introduced to the loveliness that is Pozole, this is a braised Mexican stew that usually consists of hominy, chilies, homemade stock (or high quality store-bought stock), a variety of herbs and spices, some sort of mildly fatty meat (usually pork or chicken—but this can also easily be made vegetarian, pescatarian, or vegan), and either a traditional red or green salsa. It is then topped with a wide variety of ingredients such as avocado, onion, cabbage, radishes, chicharron, lime wedges, crema, cilantro, and/or queso fresco.

Believe it or not, Pozole recipes stem all the way back to the 1500s, and it is said that the dish was only consumed on very special occasions. There are a few specific reasons for this. For starts, the corn (or maize) crop was highly sacred in the Aztec culture. In addition to that, the Aztecs believed that Gods created humans out of cornmeal dough (otherwise known as, Masa). Thus, historians tell us that the original Pozole dish was made with corn and the human flesh of prisoners who were killed by having their hearts ripped out in a ritual sacrifice. Pretty gross, huh? Thankfully, we’ve come a long way from cannibalism. And even though I have no doubt that it would pair beautifully with a nice Chianti and some fava beans, hallelujah for the fact that we’ve modernized a bit. 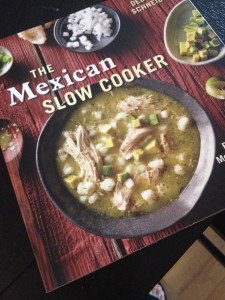 I recently came across a fantastic recipe for Pozole Verde in Deborah Schneider’s cookbook, The Mexican Slow Cooker. Now, keep in mind, I generally only use recipes as a guide, which is exactly what I did with this. Therefore, there are quite a few things that I did differently from Schneider – and you should not be afraid to veer off in your own direction, either. First of all, I used the pork products that I had in my house already (which happened to be a bone-in pork chop) in addition to some cubed pork. (Cheap and tougher cuts of meat are perfect for dishes like this. Remember, you’ll be slow cooking it for hours.) Schneider also cooks all of her proteins ahead of time. I decided to make my life easy and put all of the ingredients into my slow cooker at once (before I went to bed) – and braised everything together on “low” overnight.

For the salsa, instead of making it on my stovetop, I roasted my tomatillos, onions, and Serrano peppers in the oven until they were softened and nicely charred – and then blended those ingredients together with grapeseed oil (instead of lard, which is traditional) and toasted pepitas in my food processor. After it was blended thoroughly, I poured all of the salsa into the slow cooker and allowed that to simmer away with the rest of the soup. 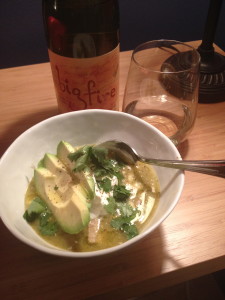 The final result is mind-blowing. My Pozole Verde creation has a somewhat similar consistency to a chili or Brunswick stew. The pork is so tender that it fell off the bone. It’s slightly spicy, but not enough to make you want to bury your face in a gallon of milk. I topped it all off with a little avocado, sour cream, cilantro, and queso fresco—and paired it with a glass of Big Fire, which is an off-dry Pinot Gris from Oregon. Absolutely incredible, and perfect for some cooler weather! Ole!

1 white onion, peeled and halved, with root end in tact

1 (28-ounce) can white hominy and liquid

In a six quart slow cooker, combine the chicken, garlic, onion, salt, cumin seeds, hominy, broth, and water. Cover and cook on low for 4 hours until the chicken is tender and cooked through (but not falling apart). Remove the chicken and let cool. Discard the bones and skin and break the meat into large pieces. Refrigerate meat until needed. Add the cilantro and continue cooking the soup on low (without the chicken) for 2 hours more.

While the soup is cooking, make the salsa. Heat a 10-inch sauté pan over medium heat. Toast the pepitas in the dry pan, stirring often, until crunch and olive-green. Let cool completely.

Place the tomatillos in a small pot and cover with cold water. Bring to a simmer over medium high heat and simmer for 5 minutes, or just until tender. Drain and place in a blender along with the cooled pepitas, onion, garlic, serranos, and cilantro. Add ½ cup of broth from the slow cooker and puree until very smooth. (For a smoother texture, you can press the mixture through a fine-mesh sieve, if you like.)

Heat the sauté pan over medium heat. Add the lard, then pour in the contents of the blender. Cook, stirring often, until the sauce is thickened and pale green, 5-7 minutes. If the sauce splatters, reduce the heat.

To finish the soup, discard the onion, garlic, and cilantro. Stir the salsa into the hot soup. Add the chicken to the soup and cook on low for 30 minutes. Taste and adjust the seasoning. Serve in large bowls, with the garnishes alongside.