I never thought of myself as the kind of person to make a gingerbread house. Sure, I've decorated ones that came in kits with my nephews at Christmas. I even remember a holiday party at The Chopping Block many years ago where we worked as teams to decorate houses. But since I hung out by the wine tasting station for most of the evening, I left most of that "fun" to my coworkers.

So, when I heard about a gingerbread contest in Pensacola, Florida (where I now live), I thought "That's cute." But when I realized first prize was $5000, I quickly changed my views on the art of gingerbread.

I started researching and pinning ideas on Pinterest. What were the best recipes for gingerbread? Should I make my own fondant or purchase Wilton's? Why is theirs so expensive? Where were those cake decorating supplies from culinary school 10 years ago that I KNOW I didn't throw away? How hard could making a gingerbread house be?

Turns out, pretty difficult when you are working from scratch.

I had come up with the idea to do a beach scene. Pensacola has gorgeous beaches (hence the move from Chicago), so I thought I'd recreate a scene from the beach, throwing a few local landmarks and some fun things like Santa Claus on a stand-up paddleboard and a fisherman wearing a Blue Wahoos (our minor league baseball team, probably better than the Cubs) cap on the pier.

In my head, it was perfect. Problem is, since my design was so unique, I didn't have any templates to work from. The beach bar is circular, so I did my best to create a template out of cardboard to translate to gingerbread. Some pieces worked, and some didn't, so sometimes, it was back to the drawing board to create more pieces to fit into the puzzle. 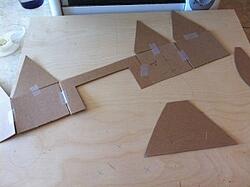 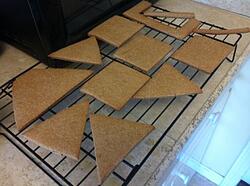 But my biggest challenge was to create a fishing pier out of gingerbread. As amazing as Google is, even it didn't have suggestions for that one. So, this project was a lot of late Friday nights full of trial and error and a definite test of my patience to get those gingerbread rods to stand up and be sturdy enough to hold a platform. 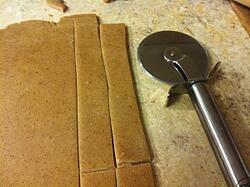 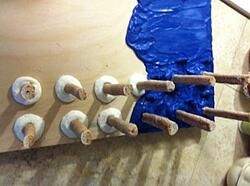 A huge resource soon became Gingerbread Exchange. Who knew there was a website where gingerbread bakers would share recipes, photos and ideas on how to make everything you can think of out of gingerbread? I learned the difference between "construction-grade" gingerbread dough and a cookie I would actually eat. I got a recipe for totally edible royal icing that literally turns into cement when it dries. I got ideas on making Christmas lights using Almond M&Ms and Mike & Ike's candy and using shredded wheat cereal for roofing material. You see, EVERYTHING in this entry was to be edible. 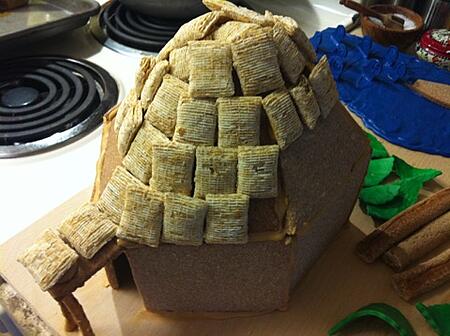 I learned the best way to roll out gingerbread dough is in a Ziploc bag and that it will keep for weeks in the refrigerator. Good thing, since I made a lot of it. 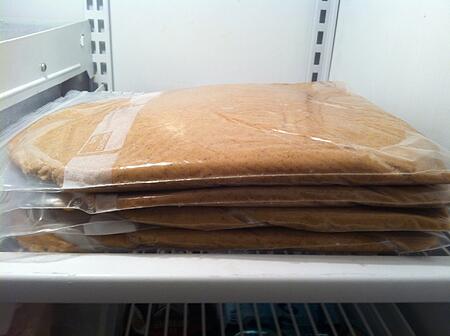 I became a master at making homemade marshmallow fondant with the help of a KitchenAid stand mixer a good friend let me borrow. I tweaked colors of royal icing to match the gingerbread and other colors in the scene. 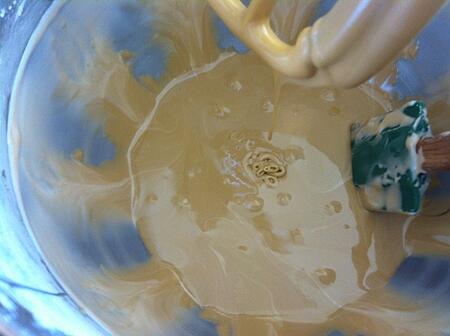 The more ideas I came up with, the more intricate my design became. I bought a modeling kit and made waves out of blue candy for the ocean. I made a YOLO (#youonlyliveonce) paddleboard. 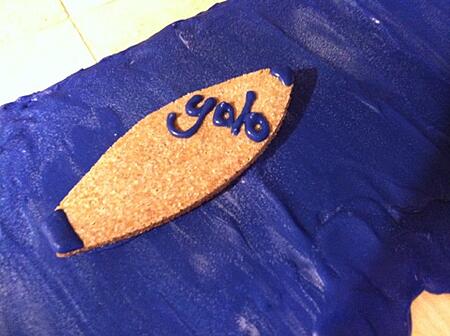 SUP Santa got a paddle made out of spaghetti covered in black icing and fondant. He's racing after a porpoise modeled in gray fondant, which is scarily similar in size to the Swedish Fish candy the fisherman is reeling in from the pier. 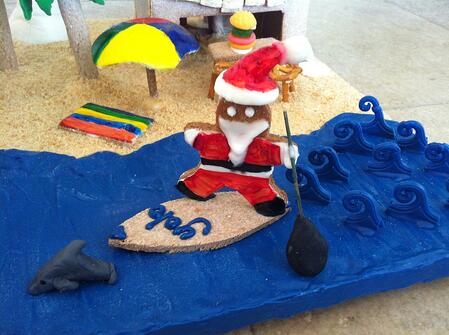 I processed Nilla wafers into a fine powder for the sand. The world's largest candy burger was placed behind "The Dock" along with a bar and stools made out of pretzels. 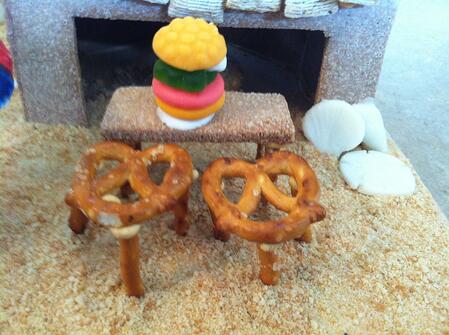 The palm trees made of gingerbread trunks and green fondant leaves took a whole evening to assemble. I realized how very little patience I actually have during this process since I had to wait for each leaf to dry before adding on the next one. 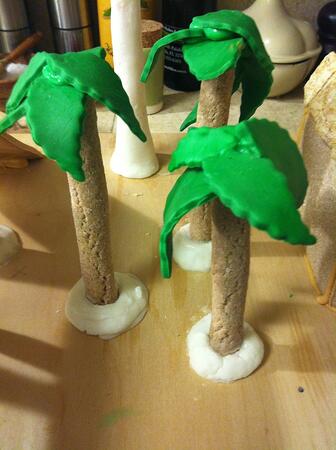 I figured out how to make a round beach umbrella and painted it the same colors as the iconic Pensacola Beach ball which sits atop a water tower. I never would have guessed it would be this tower that would be my nemesis. That's because a beach ball that's slightly smaller than a baseball made out of fondant is really heavy. 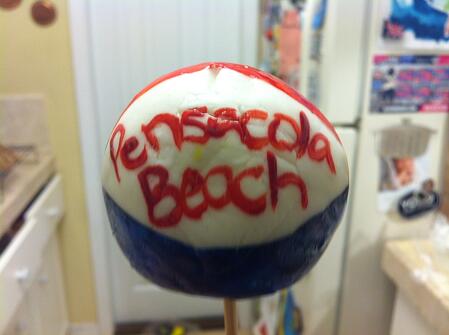 The first fondant tower I made (and let dry for several weeks so that it was rock hard) couldn't hold the weight of the ball and collapsed. I quickly made a larger and stronger fondant tower with gingerbread support inside that I thought would be sturdy enough. However, it had only two days to dry before I had to turn in my gingerbread creation. This simply wasn't enough time. So, after surviving the drive over to So Gourmet, my gingerbread's home for the next month, the tower collapsed right after I put my "house" in place. On to the third tower, which finally was the survivor. 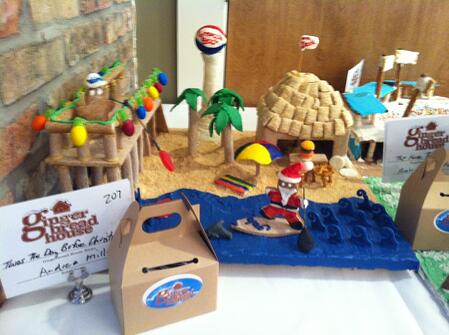 When I set up my house and checked out the competition, I knew I wouldn't be taking home the $5K prize. There were professional bakers who submitted entries with pulled sugar and airbrushed components that looked like they came straight out of Cake Boss. Definitely out of my league!

So, I set my sights on the People's Choice award which offered a $1000 prize, which is still an amazing amount of money. After what could probably be perceived by my friends as an obnoxious social media campaign, my entry collected over 1000 votes from my generous family, friends and the public. The money raised from votes went to a very worthwhile charity Health and Hope Clinic, and during an awards ceremony last week, I was awarded People's Choice in the SoGo Gingerbread House Contest. 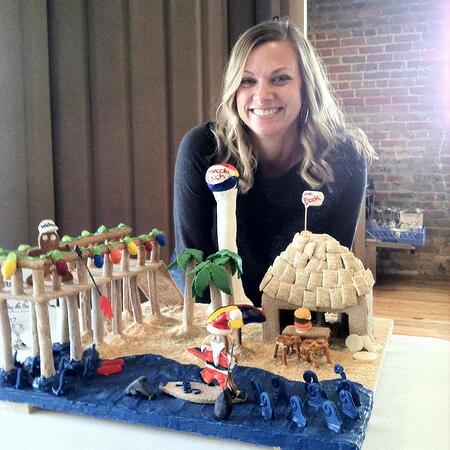 Check out all of the gingerbread entries and pictures from last week's awards ceremony. 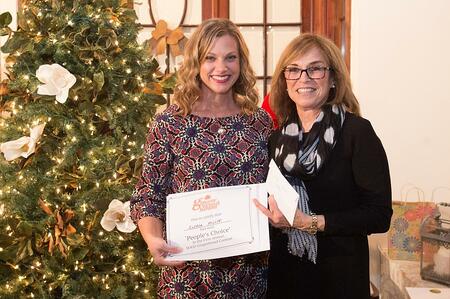 Have you ever entered a gingerbread contest? I'd love to hear your experiences in the comments.