When I heard that the recent Top Chef finale was going to take place in San Miguel de Allende, my heart practically leaped out of my chest. I was thrilled, excited and a bit nervous. Nervous because I didn’t want a television reality show to misrepresent this town and not adequately reflect its charm, peacefulness and beauty. I’ve become very protective of this city.

The finale took place over three shows. I’m almost in tears as the first part began. The work of the cameraman was exquisite, and I felt I no longer needed to act as the city’s protector. He captured the incredible beauty of the Parroquia, which is the city’s main church off the central square and what locals call the Jardin because of its garden setting and location in the heart of Centro Historico. 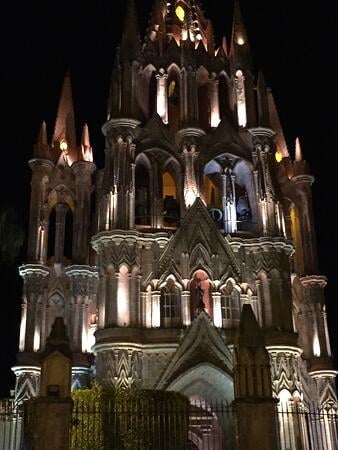 A few minutes into part one of the finale was ‘the last chance kitchen’ cooking competition. It took place on the rooftop of a tasteful, gorgeous and exquisite home. It occurred to me a few minutes into the competition when the camera was panning the outside of the home, that I had attended a party in that house. How cool is that?

Those who watch Top Chef know there is always a Quick Fire challenge. This one was filmed at the Jardin, directly across from the majestic Parroquia church. 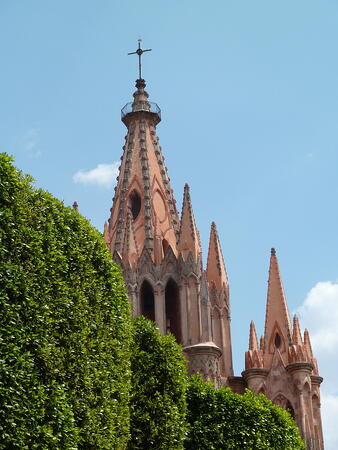 I’m almost beside myself with the joy of seeing one of my favorite places in the city. It’s the place that I walk through practically everyday I’m there. I’m thrilled that they show local kids playing, vendors selling toys and balloons and ice cream and elote stands. Elote is corn on the cob with butter, mayonnaise, grated cheese and chili powder. These shots immediately take me back to my strolls around the Jardin. I’m reminded of my weekend evening strolls when Mariachis compete for your attention.

The elimination round of Top Chef always includes rapid fire shopping. I wondered where the contestants would do their frenzied food shopping. I thought maybe the city’s central Mercado, which is the open-air market, or maybe one of the large chain grocery store. They chose one of the large chain grocery stores, known as Mega. I do a lot of shopping at the Mercado, but when I need to do substantial grocery shopping, I go to Mega. It was a thrill for me to watch the contestants navigate around this grocery store trying to shop as they spoke little or no Spanish.

The elimination challenge was held at the Instituto Allende, which used to be a hacienda but has been converted into a school, event space, art gallery, restaurant and on the adjacent land becomes the Saturday Market. Every Saturday, this land is transformed into a wonderful organic produce market sold by the farmers themselves. One can also find all kinds of wares, clothes, jewelry, soaps, baked goods, and art of every kind, as well as incredibly deliciously prepared food. This is a place that you want to spend a couple of hours exploring.

Each of the final three chefs had to create a dish inspired by the colors and subject matter of three of San Miguel’s artists. Creating food based on paintings made for a great competition!

Part 2 of the finale took place at these incredible organic gardens on a beautiful hacienda just outside of San Miguel. This hacienda has a fabulous restaurant that serves dishes made from the organic ingredients. The featured ingredient for the Quick Fire was chocolate: unsweetened chocolate, bittersweet chocolate, white chocolate, chocolates that contained different percentages of cocoa, cocoa butter, as well as milk chocolate.

After the Quick Fire, it’s onto the elimination challenge. This time the rapid-fire shopping spree takes place in the Mercado of San Luis Potosi, a fairly large city north of San Miguel in the State of San Luis Potosi. There is nothing like an open-air market. I love the smells and the way the fruits, vegetables, spices and other products are stacked on top of each other. It was at the Mercado where the producers threw a twist into the challenge. The chefs had to choose from six ingredients representing Mexican cuisine and incorporate them in dishes. The ingredients were avocados, poblano peppers, guavas and Mexican queso. These four ingredients are pretty familiar to most Americans, but not the last two ingredients: huitlacoche, which is a type of corn fungus. The sixth ingredient was escamole, which are ant eggs. This is a delicacy in Mexico, and is referred to as the caviar of Mexico.

This challenge took place at La Casona, the brand new convention center in San Miguel, which I haven’t had a chance to visit yet, but I definitely will on my next visit. This was probably one of the most difficult challenges for the chefs. Each chef had to create a dish using two of the ingredients. Each chef had to call dibs on their two ingredients to determine the ingredients assigned to each chef. The chef who was left with the escamole definitley had the greatest challenge. I’ve had huitlacoche several times and love the rich, earthy corn flavor it provides. I haven’t had escamole yet, but I will try to find them on my next visit to Mexico. I have eaten chapulines, or crickets, a tradition in Oaxaca when drinking tequila.

Finally, we come to the third and last episode of the finale. It begins with the last two challengers taking a hot air balloon ride, which takes them over San Miguel and lands in the nearby city of Queretaro. Queretaro is a commercial center and has over half a million inhabitants. The city has maintained its colonial feel and architecture the same way that San Miguel has. It’s a city of nice restaurants, a beautiful historic center and some of the nicest people you’d ever want to meet, the same as San Miguel. Fun fact: I almost purchased a home on the road that takes you to the city of Queretaro.

Gregory and Mei Lin's final challenge is to create four of their very best dishes. No twists! They head back to San Miguel where they have an hour to shop and a $2,000 budget. That budget is a great deal (think exchange rate) in Mexico so they were able to gather some amazing ingredients to work with. They each had to cook their final meal in different restaurant kitchens.

Mei Lin was assigned to prepare her dishes in the kitchen of the restaurant Cent’anni. Cent’anni is a new restaurant that opened just before my returning back to Chicago from San Miguel. After seeing it on Top Chef, I’m really excited to try it. The food there is supposed to be remarkable.

A restaurant simply named The Restaurant is where Gregory prepared his final meal. The Restaurant is one of my favorite restaurants in San Miguel. The chef/owner, Donnie Masterson, has one of the most brilliant, imaginative and creative minds I’ve encountered! Set in an old colonial house, the restaurant is incredibly beautiful, with a cool, sophisticated ambience and some of the most creative dishes I’ve experienced. The last meal I had there was absolutely brilliant. We were celebrating the anniversary of some friends who live there on a Thursday night, which happens to be Hamburger Night. Thank you Chef Donnie Masterson for letting me spend a few minutes in your wonderful kitchen! 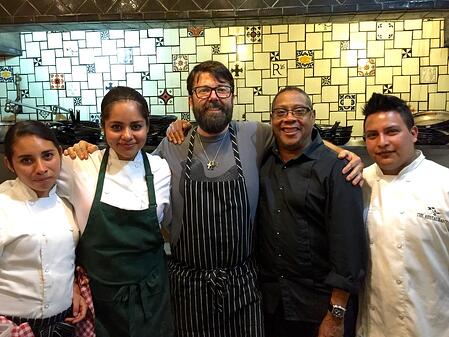 Back to the competition, and what a nail bitter it was! Both chefs created four remarkable dishes. The final judging was held at The Restaurant. The judges dissected every dish, as usual. They examine the complexities of each dish, the tiny defects, if any, the presentation and ingredients and most importantly, the taste. Both of them wowed the judges! But there can only be one Top Chef and that honor was bestowed on Mei Lin. In all the years I’ve watched Top Chef, I have never seen such a fierce and talented battle as was demonstrated by Gregory and Mei Lin. My hat goes off to the both of them!

I’m so grateful that the producers of Top Chef discovered San Miguel de Allende, Mexico. I’m also grateful that they gave all of the show’s viewers the opportunity to see the city's charm and beauty. I’m proud to call San Miguel my home away from home, and I’m truly proud to be a champion of its beauty and charm.